We Stand Together: Voices of Manitoba 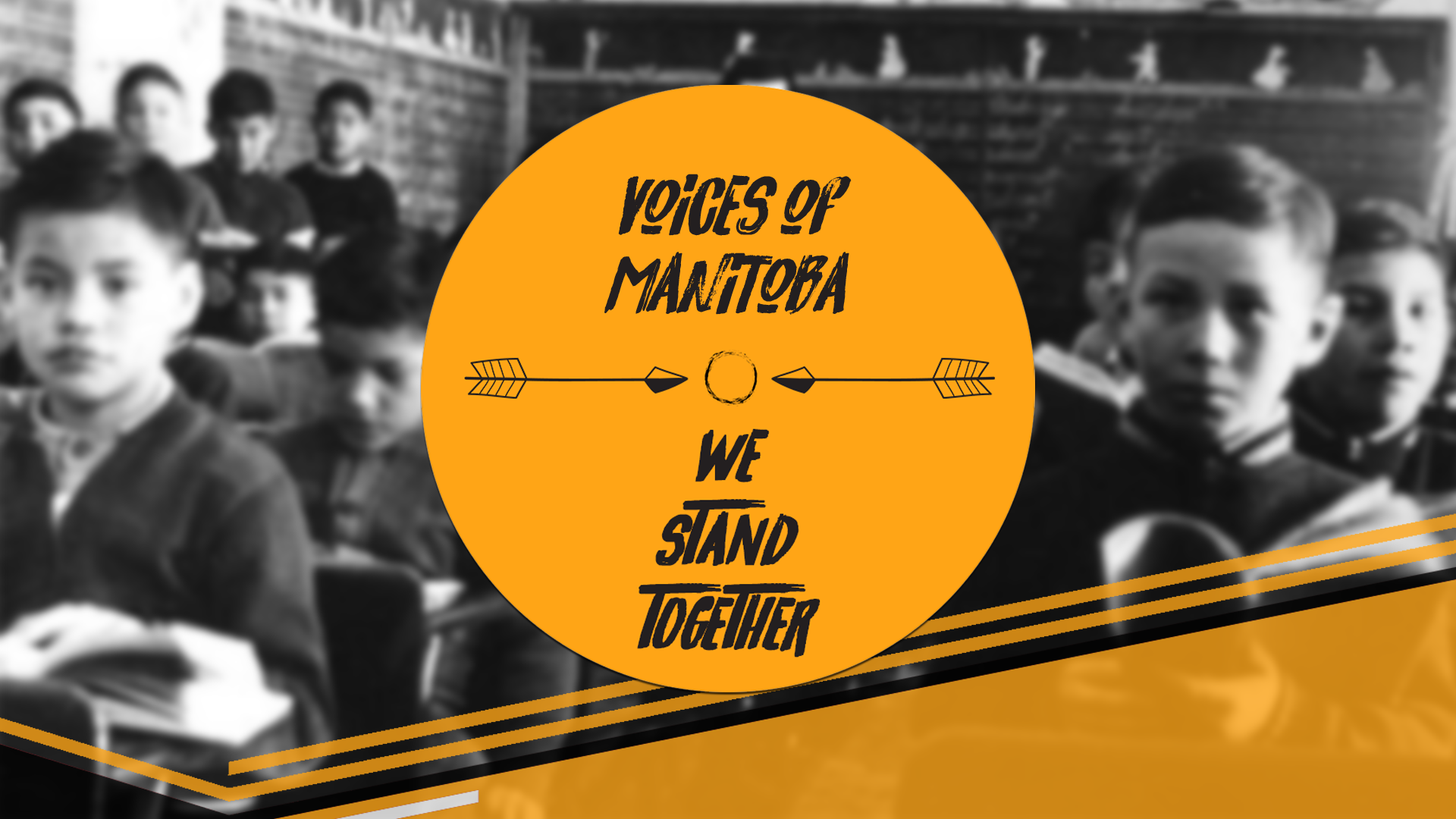 Warning: This post contains details some readers may find distressing.

According to the Truth and Reconciliation Commission of Canada,

“Residential Schools for Indigenous people in Canada date back to the 1870s. Over 130 residential schools were located across the country, and the last school closed in 1996. These government-funded, church-run schools were set up to eliminate parental involvement in Indigenous children’s intellectual, cultural, and spiritual development. More than 150,000 First Nations, Métis, and Inuit children were placed in these schools during this era, often against their parents’ wishes. Many were forbidden to speak their language and practice their own culture. While there are an estimated 80,000 former students living today, the ongoing impact of residential schools has been felt throughout generations and has contributed to social problems that continue to exist.”

These are the voices of our First Nations pained by the loss, frustrated by systemic racism and oppression, and the stories of survivors.

Gerry (Gramma) Shingoose is a Residential School survivor attending Muscowequan Residential School from 1962 to 1971. When she heard the news about these children, it reopened old wounds, a painful reminder of the emotional, psychological, and sexual abuse she endured.

“It triggered me, my children, and grandchildren. My memories and triggers have been more frequent than before since the news came out. It could have been me, my sister, or my brother. At Muscowequan Residential School, 64 children were found after it closed. The impact of these 215 children is tremendous on a survivor, including me. It also verifies, amplifies, and validates the stories we’ve been sharing, but nobody listened.

For Gramma Shingoose, reconciliation is accountability from the Federal Government and Catholic Church and acknowledging their involvement in these atrocities. Once that has taken place and ceremonies have been performed for the spirits of these children, true healing can begin.

Although it may seem like events like these are a relic of the past, the last Residential School in Canada closed in 1996. The recent trauma many faced in these schools affected their lives and the lives of their families. This is known as intergenerational trauma.

In 2014, a study published by Amrita Roy from the University of Calgary on Intergenerational Trauma and Aboriginal Women: Implications for Mental Health during Pregnancy. The paper looks into intergenerational trauma (IGT) and explains why populations subjected to long-term mass trauma show a higher prevalence of disease even several generations after the original events. Residential schools and other legacies of colonization continue to impact Aboriginal populations, who have higher rates of mental health concerns.

Another paper published in Public Health Reviews in 2017 titled Residential schools and the effects on Indigenous health and well-being in Canada—a scoping review, its objective was to identify the extent and range of research on residential school attendance on specific health outcomes and the populations affected. Of the 61 articles of empirical peer-reviewed literature, they reviewed, “The empirical literature can be seen as further documenting the negative health effects of residential schooling, both among former residential school attendees and subsequent generations. Future empirical research should focus on developing a clearer understanding of the aetiology of these effects, and particularly on identifying the characteristics that lead people and communities to be resilient to them.”

In the Journal of Adolescent Health, an article titled Intergenerational Trauma: The Relationship Between Residential Schools and the Child Welfare System Among Young People Who Use Drugs in Vancouver, Canada investigated the relationship between familial, residential school system (RSS) exposure and personal child welfare system (CWS) involvement among young people who use drugs (PWUD). This study “observed a dose–response–type trend between familial RSS exposure and personal CWS involvement and a nonsignificant difference in the likelihood of CWS involvement between Indigenous and non-Indigenous PWUD when controlling for RSS exposure. These data demonstrate the intergenerational impact of the RSS on the overrepresentation of Indigenous youth in the CWS. Findings have critical implications for public policy and practice, including reconciliation efforts with Indigenous Peoples.”

Ray “Coco” Stevenson is a well-known traditional singer and drummer from Manitoba and has seen the devastating effects Residential Schools had on survivors living in Winnipeg.

“I can only speak for Winnipeg and not the rest of Canada, but we did have a lot of people who ended up losing everything because of that. People with families who couldn’t look after their children because some were too involved in drowning their sorrows from some of the things they had to endure. What they went through in Residential Schools is something you can never forget as it is planted in your mind. I’m almost positive when you talk to Residential School survivors; nearly every day, one or more thoughts go through their heads haunt them.”

On Sunday, May 30, Manitoba’s First Nations held a four-day ceremony in front of Manitoba’s Legislative building, honouring the lives of the 215 children who were found and honouring survivors for their resiliency and stories. Alayh says we need to listen to the experiences of Residential School survivors, and accountability needs to take place.

“The survivors here, their stories have been dismissed, and if they [the government] want to do action, they will stop in their tracks of the syndromes they are causing, the syndromes they created, such as the 60’s Scoop, Child and Family Services taking away children from them [Indigenous people] to disenfranchise them, to disempower them, and holding power over Indigenous people by taking their children away in

different formalities. [Meaningful action] is honouring them [Indigenous people], compensating them properly, reinstating claims. That’s just the tip of that piece to move forward. Coming, hearing, and listening at a grassroots level is one of the most important things to do.”

Elders are essential to the survival of the culture and history of First Nations as they retain the teachings and knowledge of peoples almost wiped out by colonialism. First Nations look to their Elders to carry those teachings into the future, to ensure these tragedies are never forgotten or repeated. The news of these lost children pained Nii Gaani Aki Inini (Leading Earth Man), Elder Dr. David Courchene of The Turtle Lodge International Centre for Indigenous Education and Wellness in Sagkeeng First Nation. However, he asks what the world will be like for the children of today and tomorrow?

“I know the challenges out there are great, and it will take the courage of people who can put aside their differences and say we have to think about our children. What footpath will we leave them? What I have seen is we’re spending the inheritance of our children. If we continue to exploit the land at the rate it is being exploited, it’s at the expense of the most vulnerable, the children.”

Vivian Ketchum is an accomplished freelance photographer and writer, winning the Citizen Journalism Award in 2015 and the Presbyterian Record in 2016. As a writer, Vivian understands the importance of storytelling and ensuring stories are not forgotten.

“I understand when the story dies out, and you move on to the next news of the day, we need to keep our stories out there. The media needs to keep on this and find other ways to keep this story alive.”

When the news surfaced of 215, the shocking revelation was incredibly impactful to Vivian, as both she and her parents are residential school survivors. As a survivor, the wounds of the oppressive institution cut deeply, but she has healed enough to share her story. However, asking someone about their experiences could do more harm than good.

“For others who really want to learn, don’t go up and ask a survivor, as you can’t know what state of healing they are at, especially as this story is opening up a lot of old wounds. You may do more harm by asking them about their stories. There are a lot of books with information or places where you can talk to survivors who are healthy enough. There are other ways you can help by advocating on our behalf by the Catholic Church or politicians.”

She adds there is much more an ally can do than just asking to hear survivor’s stories by advocating for real action from those in power, not just sharing empty words.

The holiday season is approaching, winter is getting more serious, and many struggling Manitobans are trying to have good wintertime. Harvest Manitoba has reported that the number of Manitobans with food insecurity has grown recently. According to the data collected by Harvest Manitoba, food bank usage has doubled since 2019. END_OF_DOCUMENT_TOKEN_TO_BE_REPLACED

https://youtu.be/wQhEjmKNpTY It can sometimes feel disheartening to hear what’s happening worldwide. When it comes to politics, things are more divisive than ever. On November 24, Winnipeggers stood together to make a difference, marching for the Take Back the Night (TBTN) movement.  The first ever Take Back The Night event was END_OF_DOCUMENT_TOKEN_TO_BE_REPLACED

After long years of debates, discussions, and delays, the government of Canada released a new bill called C-7 in 2021. Bill C-7 has legalized assisted death for patients with incurable diseases or patients with irreversible comas. The Bill contained very detailed rules, but this Bill has some things that are END_OF_DOCUMENT_TOKEN_TO_BE_REPLACED