Water Crisis in Canada as a Reflection of Environmental Racism 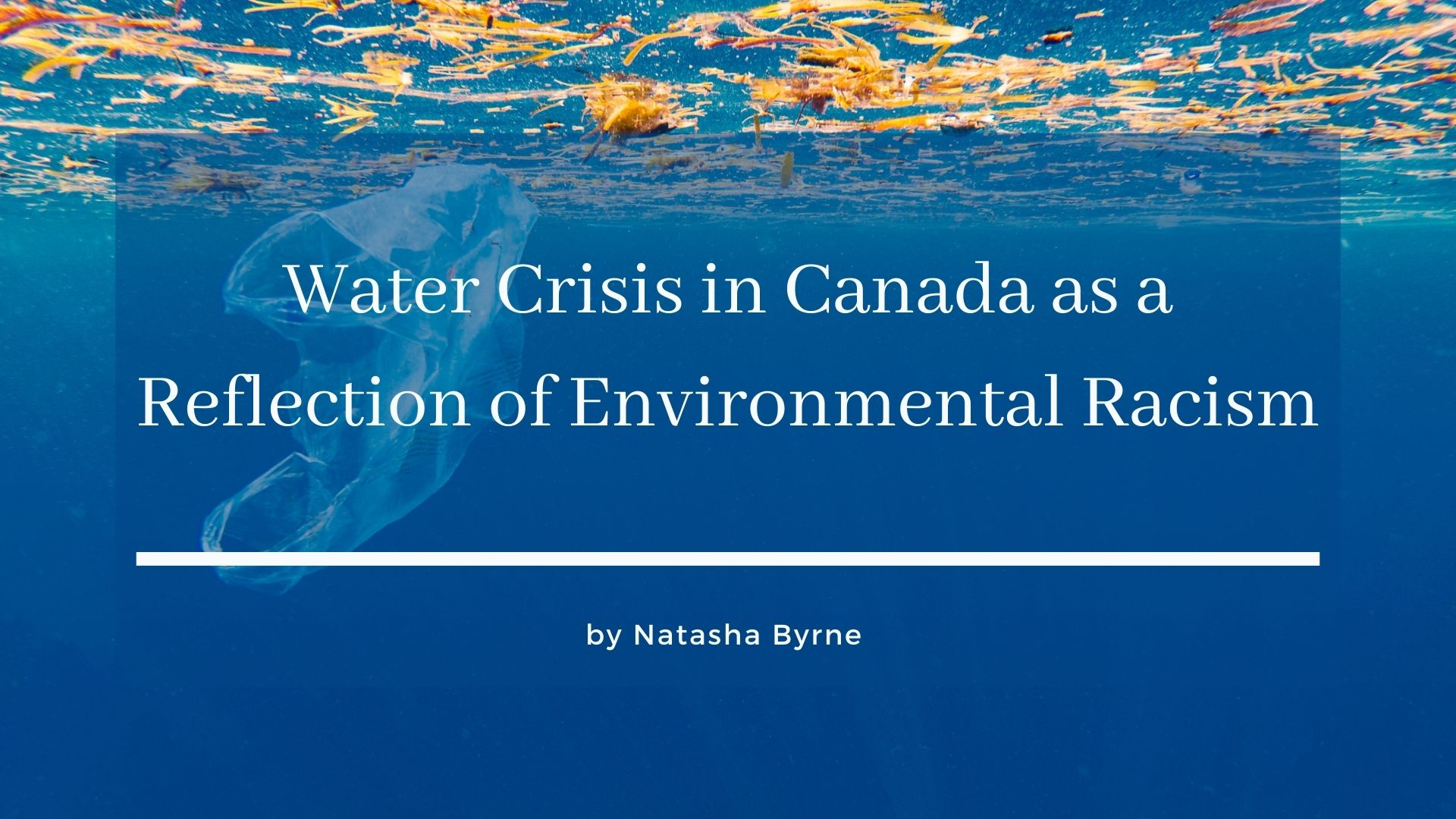 have no clean water. Like, we’re just ghosts and we’re just put in a drawer,”

News of the underprivileged in Canada will surface from time to time, reminding the non-Indigenous Canadians that safe drinking water is not readily available in all parts of the first-world country. While the prints may fade and the absurdity of this is shoved to the back of fast-paced city dwellers’ minds, the issue remains. Within the same provincial territory, a selected concentration can hydrate and utilize the primal necessity of life, while the deselected few on the remaining areas of the land do not have this right. Indigenous communities in Canada such as Neskantaga have been unable to access safe water for almost twenty-five years – preventing the Indigenous members to drink, bathe, and carry out cultural practices with safe tap water, and this is a reflection of environmental racism.

What is Environmental Racism?

According to a scholarly article published at the University of British Columbia, environmental racism is defined to be “the deliberate placement of communities in less desirable locations (such as hazardous waste sites, landfills, incinerators), or in this case, the placement of communities in areas excluded from the dominant culture.” This pertains to Indigenous communities, as they are remote and secluded, and ensuring safe running water for its residents has not been a priority for the Canadian government.

While some communities are under a boil-water advisory, others are still left with toxic water even after it is boiled. It is bad enough that one has to take the extra steps to wash oneself on a cold, winter morning, but to have no access altogether has been the reality for many Indigenous communities today. Most often slipped in the cracks of the media is that the running water for these residents can literally kill them should they consume it or use it in any way. Plainly speaking, “a number is still unable to use their water, even after boiling, due to the risk of gasoline and Trihalomethane (THM), a chemical compound that is related to a higher risk of cancer.”

At this very moment, the community of Neskantaga is residing at Victoria Inn Hotel in Thunder Bay, as they were forced to evacuate from their community. Canadian Broadcasting Corporation states that “an oily sheen was detected in their reservoir on October 19 [2020], and running water was shut off.” Neskantaga has been an interest in the news, as the attention to the lack of safe water within these borders has been drawn: “the oldest advisory that’s still in effect today was put in place back in 1995 on the Neskantaga [reserve]. This means that [its residents] have been deprived of safe drinking water for a quarter of a century” (Global Citizen).

Today, its community members are spending Christmas during the critical red code of the pandemic at a hotel, because the very necessity that should help keep them alive can damage their health. While the media has done its part in informing non-Indigenous Canadians, and to some extent, cause mild public outrage, the propaganda of a potential happy-ever-after rings the tone of its conclusion: “more than 40 days later, the evacuation is taking a toll, but community members say they are determined to maintain some kind of normal life away from home until clean drinking water starts flowing in Neskantaga for the first time this century.” Drawing attention away from the fact that there are still many communities that are in dire need of action, the media plays its part yet again to assure the remaining population that all will be well; when in fact, this is just the tip of a massive iceberg.

This issue has been prolonged, and progress has been decelerated. People can turn a blind eye to an issue that they do not immediately face, but the truth of the matter is, this is happening to their immediate neighbours. How can one part of the same garden be nurtured more than the rest? A first-world country should not spare equality from a fraction of its population. The current problem is this: “while the government presented action plans on many important topics during the speech from the throne on September 23 [2020], it failed to mention its promise to bring safe drinking water to all Indigenous reserves by next spring.” A strong recommendation is to stay aware and push the government to include permanent safe water for all Canadians in their budget. Action requires the unification of all humankind of the same land – to ensure the full availability of the nectar that sustains all life.

The government of Manitoba has released a test project plan to give the residential streets in Winnipeg City a better look into the future. The government’s goal is to lower the speed limit from fifty kilometres per hour to forty or even thirty to make the residential areas safe and END_OF_DOCUMENT_TOKEN_TO_BE_REPLACED

This winter has been one of the most interesting winters that Manitoba has ever faced. It started with very high temperatures, which surprised and confused many Manitobans. Then a couple of storms hit the province.  The weather continued to act weirdly warm, which got some of the winter activities companies END_OF_DOCUMENT_TOKEN_TO_BE_REPLACED