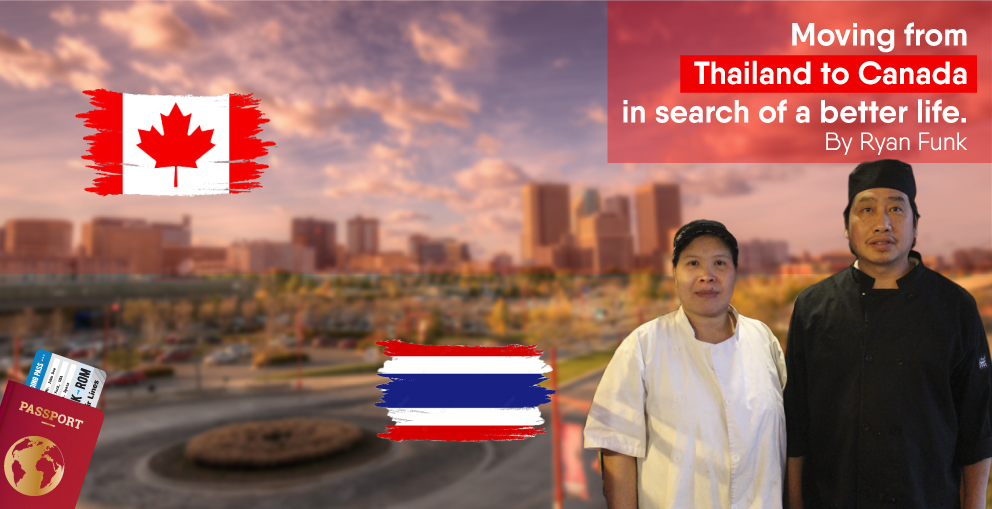 What drives a person to leave everything they have known and achieved? Such as leaving their friends and family, to a country and culture alien to them?

Sadudee and Janfong Sae-Phan moved from Thailand to Canada in the hopes of finding a better life for themselves and their family. That journey separated them for three years. At first, Janfong worked abroad, creating the avenue for her family to come over.

Living in a poor village, their family were farmers for generations. When the chance came to work overseas, Janfong took the leap of building something new and prosperous. After working hard for three years, Janfong was able to sponsor Sadudee for Canada. Even before coming over, the couple had decided they wanted to start a restaurant. Their dream became a reality. They are now owners of Boun’s Restaurant: Asian Cuisine in Winnipeg, Manitoba.

“We wanted to open a Thai restaurant, as it was [Sadudee’s] life goal,” says Janfong. “We also wanted a place where our kids could learn how to work with the family. It helps us develop their work skills and have the experience to add to their resumes.“

Family is significant to the Sae-Phans, a trait shared in many Thai households. Sadudee explains, once the children grow up and start working, they continue to live with their parents. They care for them while creating a multigenerational home. If that home becomes too overcrowded, it’s not uncommon to build another house next to it.

Such a sense of togetherness extends beyond family. During festivities, it’s not uncommon to have hundreds come together. Like weddings or Songkran, Thailand’s New Year – they come to celebrate and feast, lasting up to three days.

But, that chapter of their life is behind them. In Canada, for almost 20 years, the Sae-Phans have experienced a cultural shock. They have struggled with joining a new community.

Sadudee describes it as becoming a newborn again. She explains, “We had to learn everything new.” The learning involved experiencing the different seasons and weather here in Canada. It was also speaking and reading in English, or things as simple as going to the grocery store or using a credit card.

Another shock to them was the lack of outdoor markets. “In Thailand, you can walk anywhere to find food. You go down the street and can pick up a lot for $5 or $10,” says Janfong.

Although there were some learning struggles, the Sae-Phan family is happy in Canada. They work hard at their restaurant.

The government of Manitoba has released a test project plan to give the residential streets in Winnipeg City a better look into the future. The government’s goal is to lower the speed limit from fifty kilometres per hour to forty or even thirty to make the residential areas safe and END_OF_DOCUMENT_TOKEN_TO_BE_REPLACED

This winter has been one of the most interesting winters that Manitoba has ever faced. It started with very high temperatures, which surprised and confused many Manitobans. Then a couple of storms hit the province.  The weather continued to act weirdly warm, which got some of the winter activities companies END_OF_DOCUMENT_TOKEN_TO_BE_REPLACED