The Challenges of Entering Technology for Immigrants. By Ryan Funk 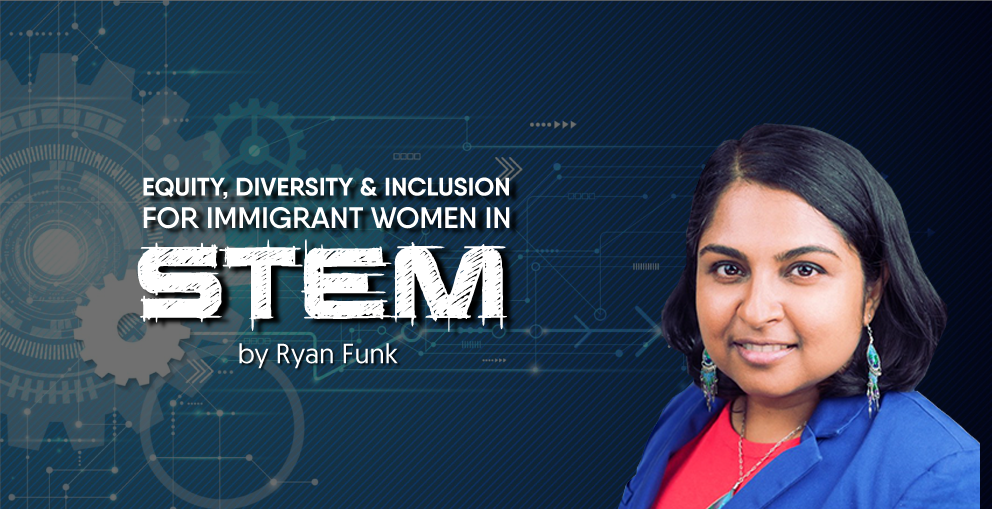 What does it take to enter the occupational fields of Science, technology, engineering, and mathematics (STEM)? For female immigrants, that can be a daunting challenge, even if they’ve completed qualifications or were even working in the field in their home country.

Sweta Rajan, along with other immigrant women across the country, wanted to create a network and system that could address cultural divisions within the workplace and help immigrant women better integrate themselves into the tech industry.

The organization named Immigrant and International Women in Science has been running workshops since 2018. The group has already completed over 40 across the country, transitioning to online versions since the first COVID-19 closures in March 2020.

Moving from India in 2000, Sweta had the opportunity to travel across the U.S., searching for a place that felt like home. She got a glimpse of that in Grad school when she had her passport stamped in Vancouver, Canada. Looking for employment opportunities as an international person was a struggle, she says, because of the H1B status requirement, so when the economy collapsed in 2008, Sweta decided to pack her things and move to Vancouver, as her P.R. Citizenship process was approved, arriving in Canada in 2009.

Sweta has experienced first-hand the gender gap in the tech industry and the cultural divide that many immigrant women face in the workplace. One of her first experiences in the U.S. while in grad school was bullying and harassment, causing a massive blow to her self-confidence, mental health, and productivity.

“As an immigrant person who was new to the culture, I didn’t even recognize that what I was undergoing was not normal or acceptable. When I moved on from that, a key question remained in my mind. How come in those three years, with all the colleagues around me, no one had stepped in or offered me support?”

According to Discovery Foundation’s B.C. Gender Equity Roadmap released in 2018, Dein 2015 to 2016, B.C. tech revenue was up by 9.2 percent and ranked third in Canada and made up five percent of B.C.’s workforce. However, women made up only 45 percent of the labour force, and less than 10 percent were in a senior leadership position.

In 2019, Northwestern Northwestern University released a study on Do Some Countries Discriminate More than Others? The study consisted of 97 field experiments of more than 200,000 job applications in nine countries in Europe and North America. They found significant discrimination against nonwhite natives in all nine countries of Europe and North America in the analysis.

“I always wanted to be that person I didn’t have for others. Whenever I went to other organizations, I looked to make sure any person coming through could come to me with any concerns they had and create a safe psychological space. Even though I didn’t have those words at the time, I was practicing these things.”

As Sweta entered more leadership roles within businesses and organizations, she created these spaces and educated people about microaggressions. However, Sweta wasn’t the only immigrant woman working to improve the workspace, with others across the country, Ottawa doing the same endeavours. As they continued to grow their work, it was only natural for them to support others to build a community that could do much more good than any could do alone. These collaborative safety nets would continue to grow and develop into Immigrant and International Women in Science.

The government of Manitoba has released a test project plan to give the residential streets in Winnipeg City a better look into the future. The government’s goal is to lower the speed limit from fifty kilometres per hour to forty or even thirty to make the residential areas safe and END_OF_DOCUMENT_TOKEN_TO_BE_REPLACED

This winter has been one of the most interesting winters that Manitoba has ever faced. It started with very high temperatures, which surprised and confused many Manitobans. Then a couple of storms hit the province.  The weather continued to act weirdly warm, which got some of the winter activities companies END_OF_DOCUMENT_TOKEN_TO_BE_REPLACED