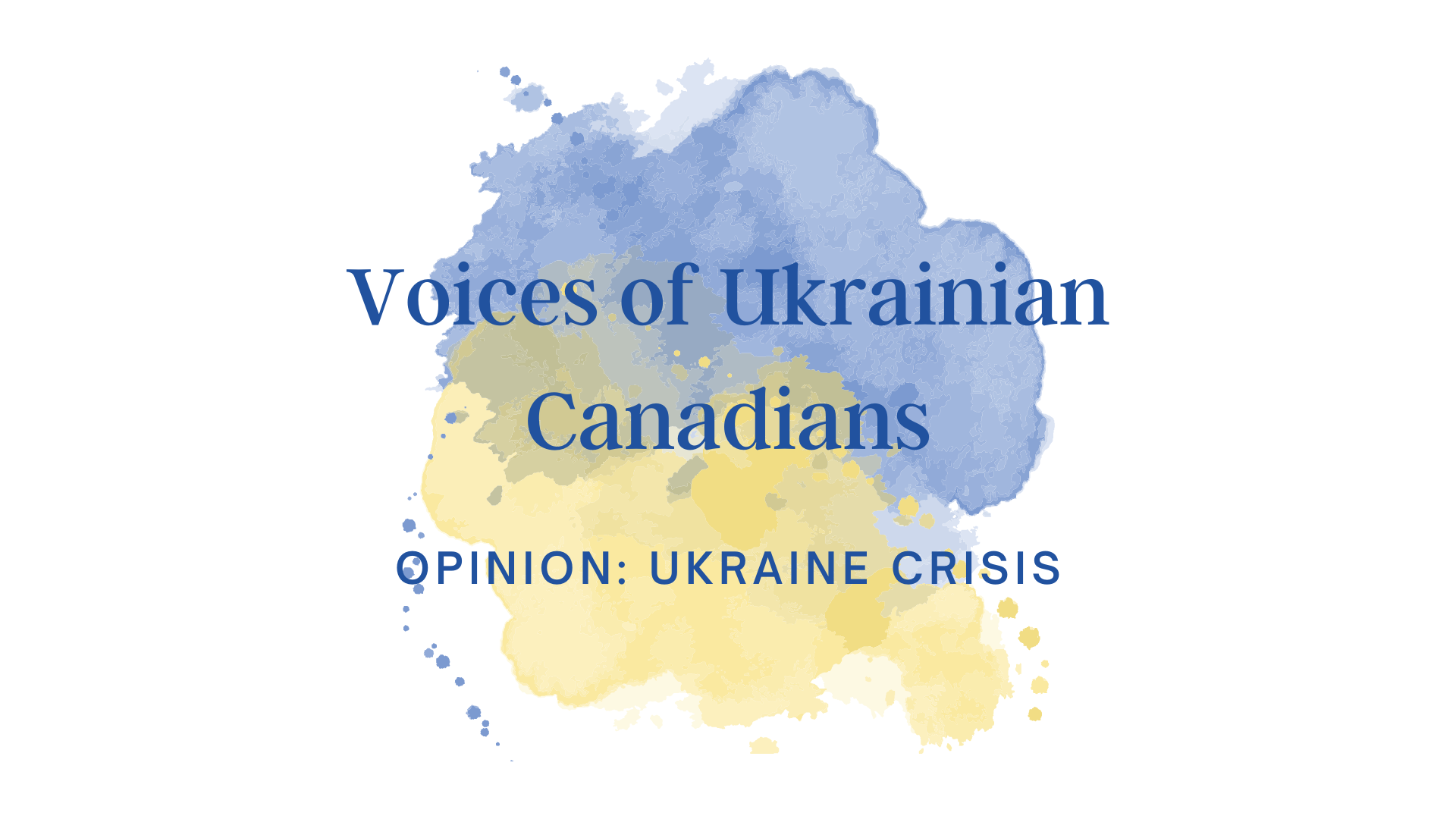 With tensions between Russia and Ukraine high, members of the Ukrainian Canadian community express their thoughts on this ever-evolving situation.

In a joint statement released by Germany, G7 leaders said, “This crisis is a serious threat to the rules-based international order, with ramifications well beyond Europe.”

Broader implications of the crisis became apparent when Russia recognized two breakaway regions of Ukraine, Donetsk and Luhansk. The regions broke away from Ukrainian government control in 2014, proclaiming”people’s republics.” Until now, they were unrecognized.

November 2021, concerns rose when satellite imagery of military build-up near Ukraine’s border. More recently, Russian troops have been brought into Belarus. The Kremlin says the forces were for military drills and deployed more forces and fighter jets to Belarus for exercises. Russia has also launched military drills in southwestern Russia, warplanes in Kaliningrad on the Baltic Sea and warships in the Black Sea and the Arctic.

The situation has caused much concern between the US and other European NATO nations, saying severe penalties with devastating sanctions if Russia intends to invade the Eastern European nation. Conversations have been rocky. However, there are continued hopes a diplomatic solution to the crisis can be achieved. The United States and NATO rejected a key Moscow demand that Nato rules out Ukraine joining the defence alliance. Russia claims it is not planning an attack, and the West has failed to consider Russian security concerns.

Ukraine has a long history with Russia. As a previous state of the Soviet Union, Ukraine declared sovereignty on July 16, 1990) and independence on August 24, 1991, from the USSR. However, the country would not have peace for long. In 2014, demonstrations by pro-Prussin and anti-government groups across the eastern and southern regions of Ukraine. The Ukrainian territory of Crimea was annexed by the Russian Federation after Russian military intervention, while protests in Donetsk and Luhansk regions escalated armed pro-Russian separatist insurgency. According to the United Nations, approximately 14,000 people have been killed in the conflict, more than 3,000 civilians.

This interview was conducted on February 25, 2022.

Bohdana Kornelyuk immigrated to Canada four years ago to study, pursuing a master’s degree. Bohdana now works in Canada.
With her family still living in Ukraine, she’s had restless nights as the invasion from Russia continues. She now speaks out with thousands of other Ukrainian Canadians for the world’s leaders to aid her home country.

This interview was conducted on February 24, 2022.

Dr. Orest Cap and his brother Alexander share their thoughts and messages from family and friends as Moscow attacks the sovereign borders of Ukraine.

Dr. Cap is a professor emeritus from the University of Manitoba and holds a Ph.D. in technical-vocational education, and Alexander the Principal at Holy Cross School. Both have friends and family in Ukraine, some in the eastern region.

Valerii Pasko is a Ukrainian community member in Winnipeg, Manitoba, who immigrated to Canada 11 years ago. An active member of his community, Pasko is a co-publisher of the Ukrainian Winnipeg Magazine.

Pasko’s parents still live in Ukraine and keep him updated with the situation transpiring on the country’s border.

As diplomatic measures are taken between NATO nations and Putin, the people of Ukraine wait in uncertainty about what the future will bring.
A retired professor from the Saint Andrews College at the University of Manitoba, Dr. Roman Yereniuk, has been looking carefully at the situation and is aware of the region’s history.

“I became very interested in the issue of Ukraine a number of years ago. I had the chance to be an observer on two different occasions. I was there for the Orange Revolution and the Revolution of Dignity. I saw how Ukrainians solved their internal problems, problems with their political system. I was pleased to see resolutions were done in a significant way.”

With the build-up of Russian forces on the border of Ukraine, Dr. Yereniuk believes he has some insight into why these actions are taking place.

“We know Russia is down on the fact they lost their major grouping of nations which supported the former Soviet Union, the Warsaw Pact. They’re trying to, I think, renew it, and Ukraine would be a wonderful partner for this if they could get Ukraine.”

Based on the atmosphere of Ukraine Dr. Yereniuk is familiar with, Ukraine is not interested in moving back.

Dr. Orest Cap is a professors emeritus from the University of Manitoba and holds a Ph.D. in technical-vocational education. Dr. Cap has been published in various national and international journals and has been involved in several research initiatives with Ukraine.

“We’re all feeling the pressure right now with the Russian aggression on Ukraine, and it’s having an impact on an international basis… You’ve got Poland, Romania, the Baltic states, and there’s always the aspect of warring if they will be implicated in it.”

Dr. Cap believes if the issue isn’t resolved at this time, it could move to engulf more of Europe.

“Ukraine could become the platform indirectly if there is an invasion, with a war with NATO on the one hand and Russia on the other, and the Ukrainian territory is going to become bloodied.”

A peaceful diplomatic solution needs to be found, says Dr. Cap. However, with the requirements stipulated by the Russian state, he’s unsure if that will happen.

Inflation has been hitting Canada hard since the beginning of the year 2022. As the year progressed, inflation kept increasing and wasn’t getting any better. Many Canadians have difficulty feeding their families because their wages aren’t enough. Food prices and fuel prices, two of the critical things in a citizen’s END_OF_DOCUMENT_TOKEN_TO_BE_REPLACED

This year many jobs have been introduced to the citizens of Canada, many of them got full-time jobs, and the economists were expecting the economy of Canada to keep improving. However, a new survey done by Research Co. showed that two out of three Canadians are unhappy with Canada’s current END_OF_DOCUMENT_TOKEN_TO_BE_REPLACED