Multiculturalism, to Victoria Nwabuisi, is like a beautiful woven carpet 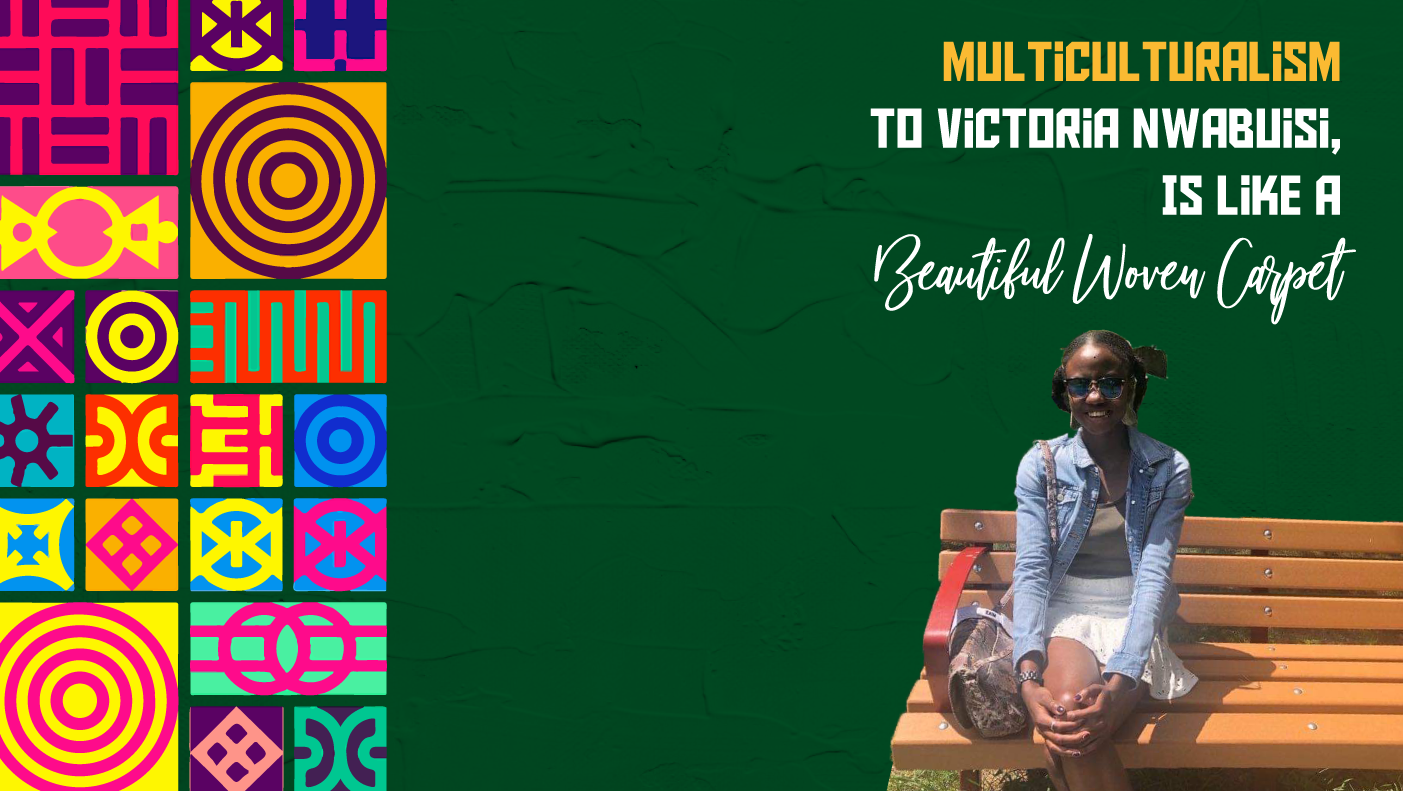 Nigeria is one of the crown jewels of multiculturalism worldwide. It’s the country containing around two hundred and fifty ethnic groups, and five hundred languages. It has a sprawling population, bustling cities, and a coastline where the waves of the Atlantic crash upon the Gulf of Guinea.

Victoria Nwabuisi is a recent graduate from the University of Manitoba – with a major in Asian Studies. She came to Canada from Nigeria to study. She remembers the cold weather at the beginning of Spring 2015 was much of a surprise and the experiences that came after.

Before coming to Canada, Victoria loved the communities she was a part of in Abuja, the capital city. She says, “As a teenager then, I was very involved with my street community, my church community. It was about getting to know all the people in my neighborhood. In High School, I attended a boarding school, which was very interesting. The boarding schools in Nigeria are like insular communities. They have everything you need, all right on campus.”

Victoria thrived during her time at the University of Manitoba. It became possible by studying hard. And, by becoming the International Students’ representative for the Students’ Union.

Victoria says that multiculturalism, to her, is like a beautiful woven carpet. A carpet with many different colors, styles, and shapes that it is forming. Like every different section of carpet is dependent on the others, next to it. She says, “If even one of the tiny pieces of fabric encompassing the whole gets lost, it would ruin the essence of the entire thing. That’s what multiculturalism is all about.“

She continues, “It’s the proclamation that you have your culture and I have my culture. It is amazing that the two can stand together side by side. If you were one day to ask me that I should make my culture like yours, then that is would be significant disfavor to the community. It would be a disfavor to society, by trying to make someone else less like themselves.” Victoria says it is clear. Multiculturalism exists at the core of both Canadian society and a globalized world.

Victoria stresses how important loyalty and fairness are to her. Something where she strives every day to get the whole picture in all her endeavors.

Victoria wishes, “I hope one day I could become an ambassador. But for now, after saving enough money, I want to pursue my master’s degree in International Securities. I hope one day I may use the background that I have, that I am accumulating, to make the world a better place. In the sense of helping people see the fuller picture of who we are as people! It is only when you begin to probe through the background and history of different people. And to reach the cultures – it is when you begin to see how interconnected we all are. I hope, I have enough influence in the future to help people see this day, more than anything. That’s what I wish to do with my life.”

The government of Manitoba has released a test project plan to give the residential streets in Winnipeg City a better look into the future. The government’s goal is to lower the speed limit from fifty kilometres per hour to forty or even thirty to make the residential areas safe and END_OF_DOCUMENT_TOKEN_TO_BE_REPLACED

This winter has been one of the most interesting winters that Manitoba has ever faced. It started with very high temperatures, which surprised and confused many Manitobans. Then a couple of storms hit the province.  The weather continued to act weirdly warm, which got some of the winter activities companies END_OF_DOCUMENT_TOKEN_TO_BE_REPLACED

Inflation has been hitting Canada hard since the beginning of the year 2022. As the year progressed, inflation kept increasing and wasn’t getting any better. Many Canadians have difficulty feeding their families because their wages aren’t enough. Food prices and fuel prices, two of the critical things in a citizen’s END_OF_DOCUMENT_TOKEN_TO_BE_REPLACED

This year many jobs have been introduced to the citizens of Canada, many of them got full-time jobs, and the economists were expecting the economy of Canada to keep improving. However, a new survey done by Research Co. showed that two out of three Canadians are unhappy with Canada’s current END_OF_DOCUMENT_TOKEN_TO_BE_REPLACED