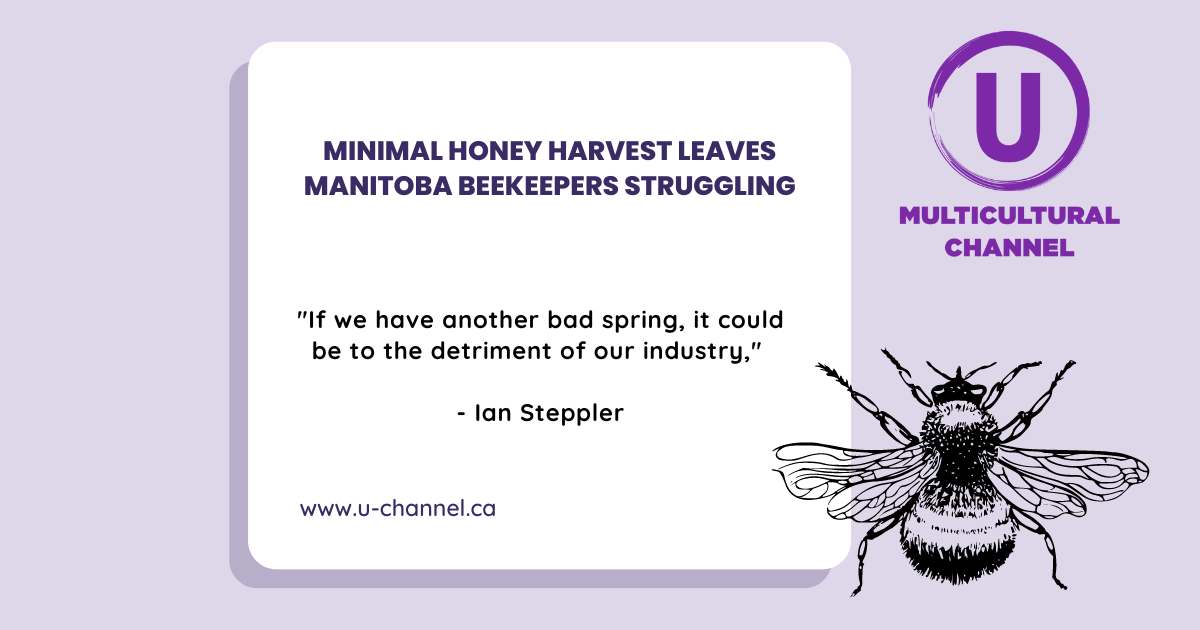 Bees are very important to humanity. A “Third of the world’s food production depends on bees,” according to bee experts at the Food and Agriculture Organization (FAO) of the United Nations.

Bee populations have continuously decreased after the harsh winter that hit Canada in 2021/2022. Data has shown the number of bee colonies in Canada has fallen in the past several years, and they are becoming vulnerable. Some bee species have reached the endangered and critically endangered stages worldwide. In Manitoba, it’s not any better. Recently, beekeepers have been in a vast struggle after the minimal honey harvest due to the massive loss of many bees or bee colonies. “Pretty catastrophic. If we have two of those in a row, it will be honey armageddon. I was looking at probably a four percent colony loss at the end of February. By the end of April, it was at 40 percent, which is not sustainable numbers,” said the owner of John Russell Honey Company.

The bees’ deaths are either caused by parasites that attack the different bee colonies or the harsh winters that Canada faces yearly. Hopefully, with this upcoming winter, the bees’ populations don’t get lower, and they will stay in a range where they can replenish over the summer and the spring.

Manitoba Beekeepers’ Association President, Ian Steppler, said, “Get better treatment options, maybe more effective treatments to be able to control the varroa mites. We should be able to keep our hives healthier. If we have another bad spring, it could be to the detriment of our industry,” he said. “We could see a lot of producers really fall back because of that, so we are really hoping we have something positive ahead of us.”

The government of Manitoba has released a test project plan to give the residential streets in Winnipeg City a better look into the future. The government’s goal is to lower the speed limit from fifty kilometres per hour to forty or even thirty to make the residential areas safe and END_OF_DOCUMENT_TOKEN_TO_BE_REPLACED

This winter has been one of the most interesting winters that Manitoba has ever faced. It started with very high temperatures, which surprised and confused many Manitobans. Then a couple of storms hit the province.  The weather continued to act weirdly warm, which got some of the winter activities companies END_OF_DOCUMENT_TOKEN_TO_BE_REPLACED