Manitoba Skies Are Lit Up By a Large Meteor 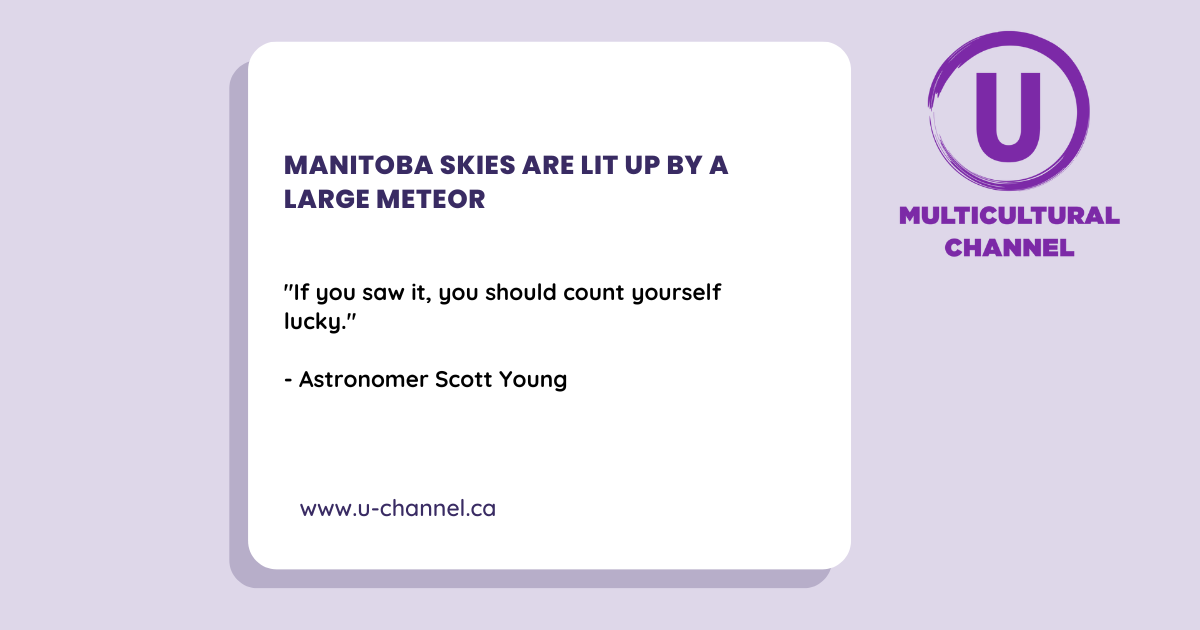 On Friday morning, November 04, 2022, before the early rise of the sun, Manitoba’s skies caught a glimpse of a vast meteor that lit up almost all of Southern Manitoba. Many people were shocked by how bright, close and clear it was.

The beautiful meteor was spotted at approximately six am. Meteor showers indeed happen every day all the time. Still, this one was special because it was way bigger than what is normally seen.

Scott Young, a Manitoba Museum Astronomer, said, “once- or twice-in-a-lifetime experience. We’re getting lots and lots of reports. It’s that wonderful time of the year when it’s dark as people get up. So a lot of people saw it. It seems to be the bigger cousin of the typical shooting star. If you saw it, you should count yourself lucky.”

Many Manitobans witnessed the meteor because it lit up their entire house. If the curtains were open, it seemed that almost the sun had risen for a couple of seconds. “[The sky] lit up like somebody was coming through the yard with a big big, huge light shining on our house,” said a Manitoban.

Manitoba is blessed with the most beautiful displays in its skies every once in a while. Those things really give all Manitobans a refreshing memory. Manitoba may get another beautiful meteor sometime soon.

The holiday season is approaching, winter is getting more serious, and many struggling Manitobans are trying to have good wintertime. Harvest Manitoba has reported that the number of Manitobans with food insecurity has grown recently. According to the data collected by Harvest Manitoba, food bank usage has doubled since 2019. END_OF_DOCUMENT_TOKEN_TO_BE_REPLACED

https://youtu.be/wQhEjmKNpTY It can sometimes feel disheartening to hear what’s happening worldwide. When it comes to politics, things are more divisive than ever. On November 24, Winnipeggers stood together to make a difference, marching for the Take Back the Night (TBTN) movement.  The first ever Take Back The Night event was END_OF_DOCUMENT_TOKEN_TO_BE_REPLACED

After long years of debates, discussions, and delays, the government of Canada released a new bill called C-7 in 2021. Bill C-7 has legalized assisted death for patients with incurable diseases or patients with irreversible comas. The Bill contained very detailed rules, but this Bill has some things that are END_OF_DOCUMENT_TOKEN_TO_BE_REPLACED