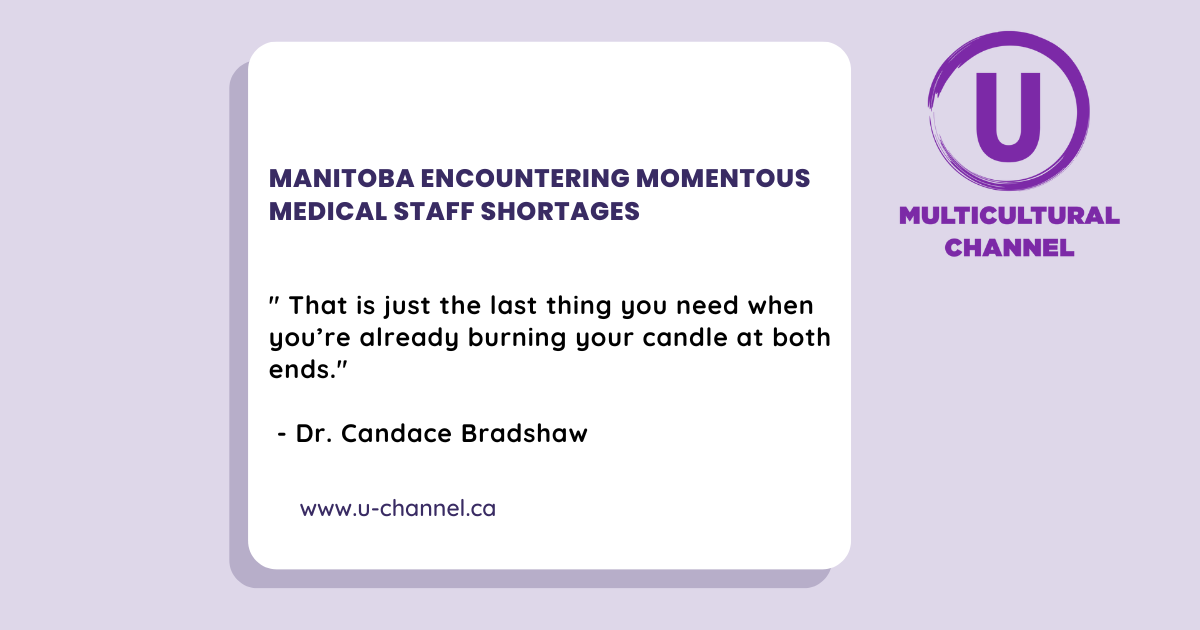 Manitoba has been having medical staff shortages for some time now. The need for more doctors is increasing, and the province is struggling with a deficient number of doctors compared to the number of patients needing help.

Statistics have shown that Manitoba is in the top three for having the lowest number of doctors per capita in Canada. The statistics have also reported that Manitoba has only two-hundred-seventeen doctors for hundred-thousand patients and needs four hundred-five more doctors to reach the average doctor-to-patient ratio set by the Canadian government. What made the Doctors Manitoba President very concerned was that outside of Winnipeg, there are some regions with only ninety-six doctors per capita, and the most significant number of doctors per capita outside Winnipeg is only one-hundred-fifty, which is very low and under the average Canadian ratio.

“It required us from going at 110% of our capacity to 120%, and that is just the last thing you need when you’re already burning your candle at both ends. I think the pandemic was the final straw for a lot of people,” said Doctor Candace Bradshaw, President of Doctors Manitoba.

Doctor Bradshaw is also very anxious about the future of this shortage because many doctors, as big as forty-three percent, are either planning for retirement, reducing their clinical hours, or just leaving. The doctors have also been struggling because of this shortage since they have to work longer hours, burning them out.

Doctors Manitoba has sent recommendations to the province so that some changes could occur to the system. They are hoping that Manitobans and doctors will see some improvement soon. The president of Doctors Manitoba, Candace Bradshaw, also added, “We want to be the best province in the country in terms of physician recruitment and retention, and I think we are headed in the right direction.”

Moreover, the province and the medical associations in Manitoba are working on finding many solutions to help this medical shortage in Manitoba stop eventually, so both the doctors and the patients can take a step forward into a brighter future.

The government of Manitoba has released a test project plan to give the residential streets in Winnipeg City a better look into the future. The government’s goal is to lower the speed limit from fifty kilometres per hour to forty or even thirty to make the residential areas safe and END_OF_DOCUMENT_TOKEN_TO_BE_REPLACED

This winter has been one of the most interesting winters that Manitoba has ever faced. It started with very high temperatures, which surprised and confused many Manitobans. Then a couple of storms hit the province.  The weather continued to act weirdly warm, which got some of the winter activities companies END_OF_DOCUMENT_TOKEN_TO_BE_REPLACED