Knowledge has no boundaries for Simone Chiu 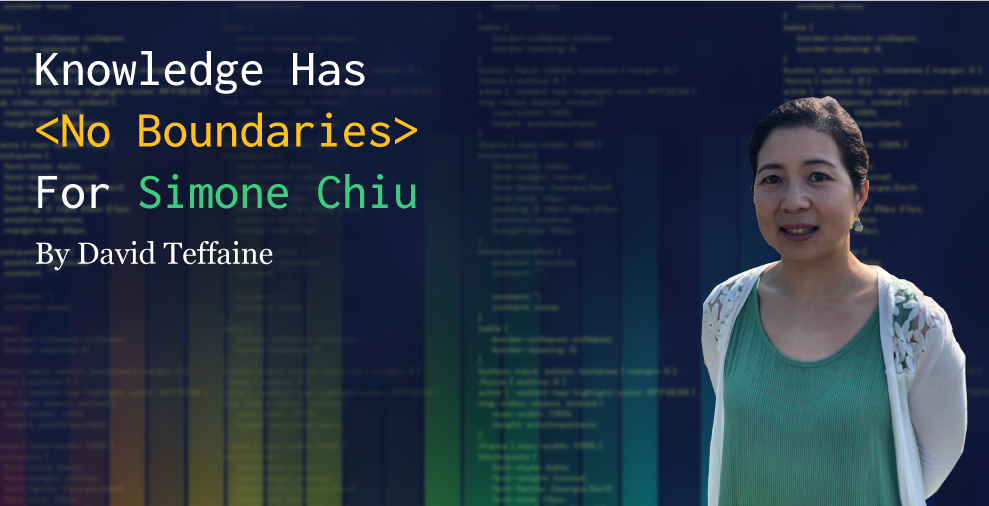 In 1898, the United Kingdom acquired a 99-year lease on the area which is today known as Hong Kong. By the year 2000, it had become and continues to be, one of the world’s most important financial sectors and commercial ports. Hong Kong is also the city with the most number of skyscrapers in the world. Over seven million people call Hong Kong their home, and Simone Chiu used to as well, before coming to Canada.

“I came to Canada with my mother, with the intention of studying at a university here.” Simone mentioned, “While my dad stayed in Hong Kong to look after my grandfather, my mom and I did very well here on our own. I arrived when I was fifteen. Later, in university, I took Environmental Science and Developmental Studies. Now I’m in university again. I am studying Psychology and Business in Human Resources and International Business.”

Simone hopes to be a lifelong learner, wanting to stay at university even after retirement. “In Hong Kong, less than half of the population studies in higher education. There is a ratio of about one university for every million people,” says Simone. Simone also loves the political system of Canada. She loves it being a strong advocate of liberty and individual choice. “Canada is a very good country where a democratic system merges with multiculturalism. To me, that’s a great place to live.”

Like Canada, Hong Kong is also multicultural. Hong Kong has people from Pakistan, India, Russia, and Sri Lanka living there. In Hong Kong, athletics and martial arts are highly praised and respected.

“I’m a member of the Ching Wu Athletic Association. I have two children who are ten and seven years old. Along with me, I want us all to learn at least a little bit of Kung Fu. It’s good for them to learn Kung Fu because it is more than just technique and form. It’s a philosophy, a way of living your life. It is about limitations – how to control your own inner strength and be humble and kind to other people. What you learn is like building stamina, for both – the body and the mind.”

Simone goes on to say that the classes are fantastic for anyone with different skillsets. Classes are of ninety minutes in length. “By the end of the classes, you become exhausted, but in a refreshing way. You may drench in sweat, have tired muscles, but there is so much satisfaction in completion. I have practiced enough that my body is more adjusted to it now and I am thankful!” Simone mentioned that Ching Wu is open for anybody, of any background, age, or skill level.

Simone said many of her values have stemmed from a syncretism of her heritage. It’s also from her time practicing martial arts, the everyday commitment to being a mom, and her time studying in university. Simone shared, “Balance is the number one thing for me. Selflessness and helping others come right after that. Balance is something I practice every day, and I’m thankful for it because of my family. I married a Prairie boy who grew up here in Manitoba. The way we look after our children has many advantages, like taking the good from both styles of parenting – Asian and Western. If we can bring out the positivity from each culture, then our children will be strong. They will understand more, see new perspectives. To me? That would be balancing.”

The government of Manitoba has released a test project plan to give the residential streets in Winnipeg City a better look into the future. The government’s goal is to lower the speed limit from fifty kilometres per hour to forty or even thirty to make the residential areas safe and END_OF_DOCUMENT_TOKEN_TO_BE_REPLACED

This winter has been one of the most interesting winters that Manitoba has ever faced. It started with very high temperatures, which surprised and confused many Manitobans. Then a couple of storms hit the province.  The weather continued to act weirdly warm, which got some of the winter activities companies END_OF_DOCUMENT_TOKEN_TO_BE_REPLACED

Inflation has been hitting Canada hard since the beginning of the year 2022. As the year progressed, inflation kept increasing and wasn’t getting any better. Many Canadians have difficulty feeding their families because their wages aren’t enough. Food prices and fuel prices, two of the critical things in a citizen’s END_OF_DOCUMENT_TOKEN_TO_BE_REPLACED

This year many jobs have been introduced to the citizens of Canada, many of them got full-time jobs, and the economists were expecting the economy of Canada to keep improving. However, a new survey done by Research Co. showed that two out of three Canadians are unhappy with Canada’s current END_OF_DOCUMENT_TOKEN_TO_BE_REPLACED