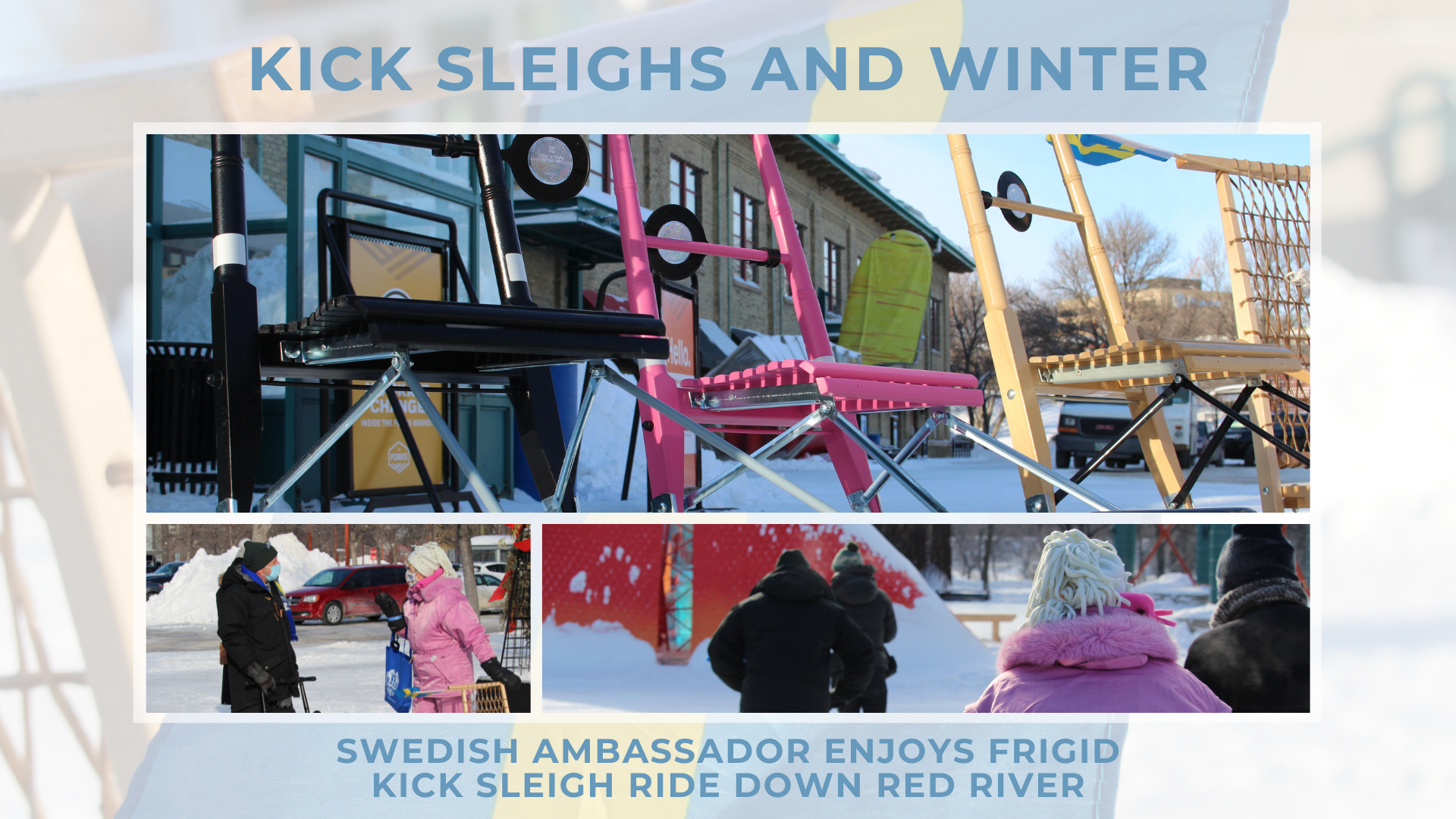 Last Thursday, Winnipeg was host to a special guest with the Swedish Ambassador to Canada, Urban Ahlin.

Ambassador Ahlin assumed his new role at the Embassy of Sweden in Ottawa in Feb 2019. On his first visit to Winnipeg as ambassador, he joined his nordic counterparts for various meetings with Manitoba’s legislators. Ambassador Ahlin was invited down to the Forks by the Swedish Cultural Association to celebrate the aspects of Sweden and the other Nordic countries.

Even though it was -38C, Ambassador Ahlin was adamant about heading out onto the Red River and enjoying a pleasant ride on a kick sleigh. Winnipeg Trails recently introduced rentable kick sleighs into their inventory with the hope of bringing this nordic staple into the Manitoba public’s awareness. Kick sleighs are used widely in Sweeden, says Ambassador Ahlin, as a means of transportation to go to the grocer or when your going ice fishing. According to Ambassador Ahlin, kick sleighs haven’t been used often in Sweden since the ’60s. It wasn’t until recently that they started looking at more environmentally friendly solutions to road clearing that they’ve started to see more widespread use again.

“We have it like it is in Winnipeg. The walkways have snow, so it’s easy to ride the kick sleigh. We started using more salt on the walkways, and when you have salt on concrete and asphalt, you can’t really use [kick sleighs]. For a period of time, they went away. Nowadays, it’s more environmentally friendly, we’re using less salt, and now kick sleighs are coming back into the Swedish tradition.”

However, if they are going to achieve more mainstream appeal here in Canada, the way we clear our roads and walkways will have to change.

“We have a little bit of different approach to plowing streets. In Ottawa, they pour salt onto the roads to get rid of ice. In Sweden, you don’t do that. We have studded tires, and we tell people to drive carefully because of winter conditions. The first thing we plow are the walkways. We look at it from the perspective that kids need to go to school, and we need to look to other things than cars.”

Sonja Lundstrom, President of the Swedish Cultural Association and Anders Swanson from Winnipeg Trails were ecstatic to have the opportunity to meet and chat with the ambassador and were pleased with his excitement to take on the cold winter day.

Lundstrom was incredibly honoured to have the privilege to meet an Ambassador who represents her ancestral home.

“This hasn’t happened for quite some time for an ambassador to come and connect with the big Scandinavian population in this city—that really fuels our fire to keep our culture and heritage going. We are excited to be open and learning, and we can be the mode of communication from what the Scandinavian countries are doing. We can learn from them, and they can learn from us.”

Swanson has spent the last 15 years dedicating himself to bringing international best practices and active transportation design to Canada and Winnipeg, specializing in winter. Having met various MPs and national level politicians from Nordic countries before, learning what’s going on there can give a glimpse into the near-future of Canada.

“It was nice to have somebody from Sweden who you could talk to about policy a little bit and show him around your hometown and understood likely. I wasn’t let down in that sense. For Winnipeg Trails Plain Bicycle Project, we’re getting known for seeking out the best in personal transportation that’s human-powered. The kick sleigh is part of that. It was great to have a chance to focus on this, and I really liked being able to see the excitement on the faces of Sonja and her colleagues.”

The entire escapade has the Scandinavian community excited to develop the relationships between the Scandinavian nations and Canada and help inspire Canadians they don’t have to dread the winter but learn to embrace it and find new ways to experience the lands and environments found here.

The government of Manitoba has released a test project plan to give the residential streets in Winnipeg City a better look into the future. The government’s goal is to lower the speed limit from fifty kilometres per hour to forty or even thirty to make the residential areas safe and END_OF_DOCUMENT_TOKEN_TO_BE_REPLACED

This winter has been one of the most interesting winters that Manitoba has ever faced. It started with very high temperatures, which surprised and confused many Manitobans. Then a couple of storms hit the province.  The weather continued to act weirdly warm, which got some of the winter activities companies END_OF_DOCUMENT_TOKEN_TO_BE_REPLACED