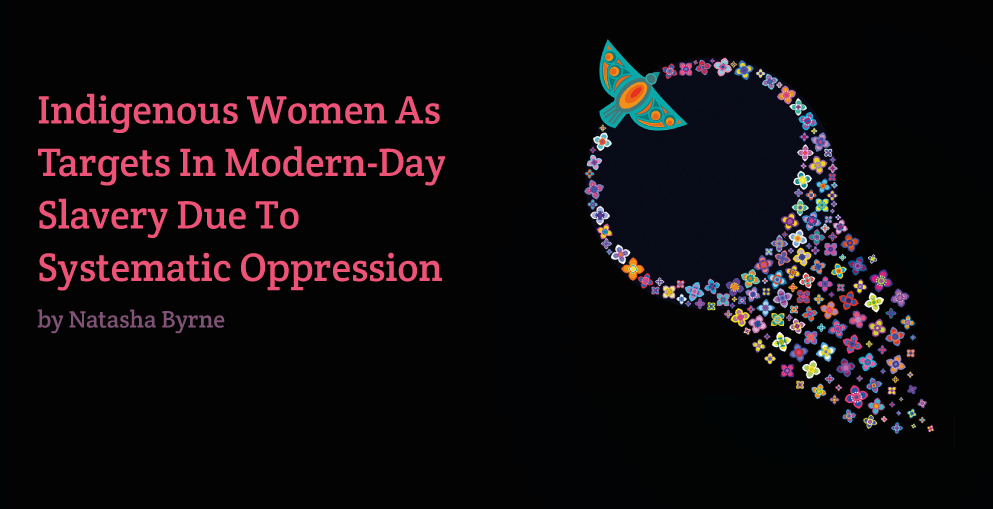 As the issue of human trafficking increases with time due to accessibility and little sense of awareness among the public, so does the risk of Indigenous women in North America being drawn into this modern-day slavery that is poorly mentioned. On top of being underrepresented members in society, it is unfortunate that the divide is more prevalent when they are also victims of this unscrutinized concern. In order to understand the importance of educating oneself on why Indigenous women are commonly targeted, it is imperative to include the vicious cycle they undergo from colonialism to the ongoing systematic oppression that makes them modern-day sex slaves.

According to statistics of a 2016 Public Safety Report in Canada, “while Indigenous women only make up 4 percent of the Canadian population, they roughly make up 50 percent of trafficking victims;” and this is with reported data alone. In the article “Human Trafficking Among Native Americans,” Maggie Logan emphasizes how this specific group is more prone to be victims in her own research: “Native American women are two and one-half times more likely to experience sexual violence than any other American women,” and that “[they] are trafficked far more frequently than any other group in the United States.” Not considering the unreported data that might exceed the statistics provided, it is undeniable that the Indigenous population struggle with potentially being barred into the psychological and physical turmoil of human trafficking.

The root of this problem dates back to early colonial contact. Not only was the harmonious world of the Indigenous population shaken into forced civilization and the horrific abuse that has failed to be printed in textbooks, but “[t]he cultural understanding of Indigenous women as sexual, unworthy, and therefore, violable was subsequently enshrined into law.” According to the Native Women’s Association of Canada, this historical skewed comprehension extends the interruption of Indigenous women’s voices in today’s society, which strengthens the role of their abusers to place them in constant violence. “As Indigenous women have been stating for decades, and which the Inquiry on Missing and Murdered Indigenous Women and Girls has recently indicated, the cultural understanding of Indigenous women as inherently sexual and therefore violable, has tangible, real-life implications for Indigenous Women’s lived experience of violence.”

As the criminals involved would source out those that are vulnerable, it is indicative that Indigenous women are targeted due to a variety of reasons. These include poor living conditions, unemployment, lack of access to social and economic resources, impacts of colonization such as residential school experience, and prior experience to the sex trade or family violence. A common method is developing a serious relationship with the victim by gaining their trust and promising a bright future, only to lead them to the unfortunate circumstance of being trafficked.

It is imperative to understand that the only way to overcome this persisting problem is to take large steps by addressing this issue “in a deliberate, cohesive, and cross-jurisdictional way.” Namely, “the issue cannot be properly addressed without examining the root causes of violence against Indigenous women and girls and the colonial legacy.”

Ourcommons.ca. 2018. Trafficking Of Indigenous Women And Girls In Canada. [online] Available at:

The government of Manitoba has released a test project plan to give the residential streets in Winnipeg City a better look into the future. The government’s goal is to lower the speed limit from fifty kilometres per hour to forty or even thirty to make the residential areas safe and END_OF_DOCUMENT_TOKEN_TO_BE_REPLACED

This winter has been one of the most interesting winters that Manitoba has ever faced. It started with very high temperatures, which surprised and confused many Manitobans. Then a couple of storms hit the province.  The weather continued to act weirdly warm, which got some of the winter activities companies END_OF_DOCUMENT_TOKEN_TO_BE_REPLACED