India School of Dance, Music and Theatre – Behind the Scenes with Pamela Rebello

India is a country that has one of the oldest and most complex histories in the world. The nation gained its independence from the United Kingdom in 1947, and it is now the largest democratic republic in the world. Its ecosystem consists of titanic mountains, flowing rivers and sweeping plains. With an immense range of cultures, dozens of languages, and the origin of over four distinct and major world religions, it attracts tourists from across the globe to visit its vast network of temples and experience its delicious delicacies and colourful culture. One such expression of this culture is through the art of dance.

Pamela Rebello is a woman of immense achievement that includes being awarded the Order of Manitoba. She is the Executive Director of the India School of Dance, Music and Theatre. This school is located in Winnipeg and aims to give Manitoban patrons the opportunity to learn from experts and develop skills in the art of classical Indian dance. This style of dance is ancient and gave rise to the popular style of ballet. It is regarded as one of the most technically challenging forms of physical expression that a person could partake in. Due to the global prominence of COVID-19, the India School of Dance has been adapting to new challenges with the usage of space and increased communication with its sister organizations around the world.

Born in Mumbai, Pamela’s experience in Canada began with uncertainty and ended with prosperity. She initially arrived in the United States to study at a university. She explains her decision in moving to Winnipeg with her husband: “the 1960s was a period of great unrest in the United States due to the national mail strike at the US/Canada consulate. During this time, my husband and I heard about an opportunity to move to Winnipeg, which is at the heart of Canada, and where there were many job opportunities.” Her husband went on to accept a job with the St. Boniface School Division. Pamela developed a love and appreciation for the prairie city. “I believed then as I do now that Winnipeg is the most vibrant cultural city in Canada. Also, the environment, the lifestyle and the warmth of the people compensate for the frigid cold winters.”

Pamela has many core values, and she hopes to teach them to everyone in her personal and professional lives. “The primary values that have been instilled in our family are courage, integrity and perseverance; which translates into love and kindness in your interaction with people, as well as, sincerity and simplicity in how you delegate and handle responsibilities on a day-to-day basis.” She applied these values before being the Executive Director for the India School of Dance when she worked in the India pavilion during Folklorama from 1970 to 1991.

During this time, she served on the Task Force for Multiculturalism and on many boards where she reflected on the principles of multiculturalism. “Multiculturalism must be perceived as a contribution from various cultures in one vicinity. An appreciation for a Ballet recital would be just as much for a Bharatanatyam performance, as both are bestowed within the arts and culture of dance.” One life lesson Pamela wants to pass on to everyone is that we make a living by what we get, but we make a life by what we give. To Pamela, “Multiculturalism makes you see the world from a lens that sharpens your thoughts and widens your perspectives, helping you to be more profound in your deliberations.” 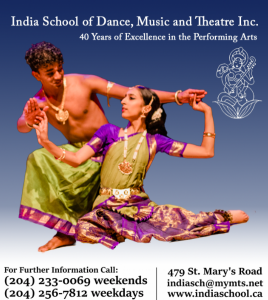 The government of Manitoba has released a test project plan to give the residential streets in Winnipeg City a better look into the future. The government’s goal is to lower the speed limit from fifty kilometres per hour to forty or even thirty to make the residential areas safe and END_OF_DOCUMENT_TOKEN_TO_BE_REPLACED

This winter has been one of the most interesting winters that Manitoba has ever faced. It started with very high temperatures, which surprised and confused many Manitobans. Then a couple of storms hit the province.  The weather continued to act weirdly warm, which got some of the winter activities companies END_OF_DOCUMENT_TOKEN_TO_BE_REPLACED