U Multicultural is appointed by The Canadian Association of Community Television Users and Stations (CACTUS) to implement the Local Journalism Initiative on behalf of the Department of Canadian Heritage.

“I love video editing and covering stories, which is why I decided to enroll in the Broadcast Media Program. I’m hoping to put the Winnipeg community in the focus of my stories and join together to address the local civic issues.” 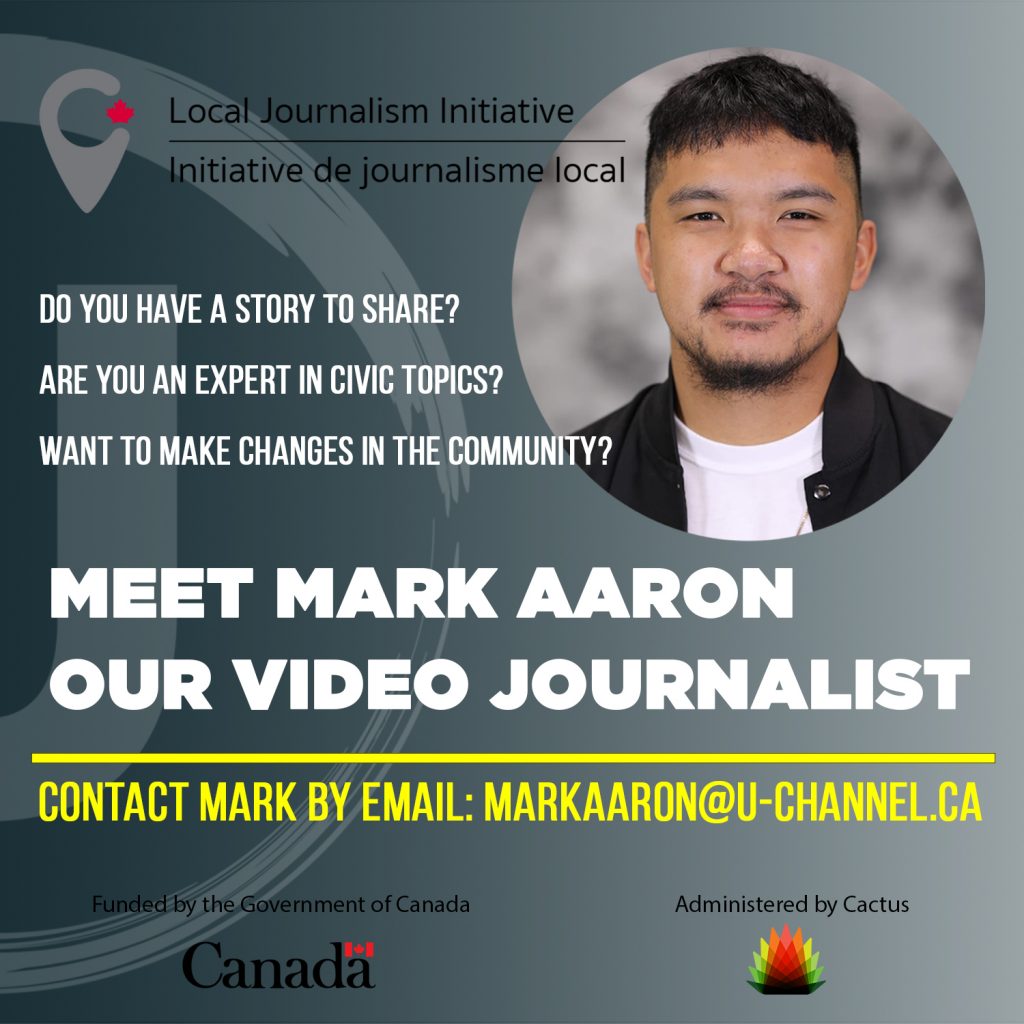 Personal care homes have been having a rough time dealing with the Covid-19. With the growing numbers of cases, it’s hard to maintain a safe and healthy environment in personal care homes. All the employees who walk in to get ready to work, have to change when they get to work and when they clock out they have to change as well. They have to wear the same things as the people who work in hospitals because of the high case numbers affecting the residents in some personal care homes. They are being precautious with everything and only limiting guests to visit their residents.

In this episode of In Focus by U Mulitculutrual. Mark Aaron interviews Kevin Friesen an executive director of Southeast Personal Care Home. He gives his personal experience dealing with Covid-19 and working at a personal care home. As well how are employees handling all the restrictions and rules to follow.

Covid 19 has had a huge effect on our everyday lives. We had to change our daily routines to follow all the restrictions. This means people can’t see their friends and family. As well we had to change our daily routine. Most people used to going into the gym and being active but with Covid, some people stop exercising and being active. Because in the past 2 months gyms and recreational sports have not been allowed in Winnipeg because of the high count of Covid cases. Some people maintained their health by working out at home. But gym owners have found a way to help Winnipegers stay active and fit.

In this episode of In Focus by U Mutlicultrual Mark Aaron is interviewing the Ceo and founder of DreamBootcamp Lendyll Soriano. He opened Dreambootcamp last year and it has been growing in popularity. But with Covid 19 it has been a rough time for Lendyll and his employees. At the beginning, of the first covid hit in March, they had to close the proximity between other people. During the summertime, they reopened up but they had to limit the participants going to workout and follow all covid guidelines. But when the second wave they had to reclose their gym.

Moving into a new country can be scary. Not knowing anyone, not use to climate change. Not having the resource or even having the proper education. With the struggles of moving into a new country in mind, people don’t need to worry. Many of them are trying to leave their country because of the government or starting a new life. Back in the day, there weren’t many resources or help provided. So immigrants have a hard time finding a job because our education system doesn’t match with their countries. They also do not use the country or its culture so they feel uncomfortable and out of place.

In this episode of In Focus by U Multicultural by Mark Aaron. He interviews the Immigrant Center Manitoba employees and how they immigrated here and the struggles they faced moving here in Winnipeg. They now help immigrants moving here by giving them the resource and help they need to live in Winnipeg.

Many international students come here to Canada wanting to learn outside their country. But some of them never been outside their country or matter in fact their continent. People want to learn in Canada for the experience and as well as for the land of opportunity. The IRCC reports that as of December 2019, there were a total of 642,480 international students that came to Canada. But some of them don’t really have the resources and they struggle sometimes in finding jobs or an education. Many of them move on their own from a new country without their family and friends.

In this episode of In Focus by U Multicultural hosted by Mark Aaron, he talks to a Colombian student named David Sanchez who moved to Winnipeg in 2017 to give him a great opportunity. But they were many struggles that faced him when moving here and leaving Colombia behind.

A lot of people are missing going out with their friends and gathering together to spend time with them. But with Covid 19 it’s been limiting us to do those things. We can’t travel or even play sports together. With the L.I.V.E dance crew and studio, they can’t do anything at all. Angel Advincula the founder, director and studio of the LIVE dance crew has to follow the Covid 19 restrictions. He usually has like 40 people practising but he had to limit the studio space to 10 people. They represent Canada in the Hip Hop International every year but they can’t do it anymore cause of the travel restrictions. It’s hard to keep the doors open for the LIVE dance studio if no one can’t take classes cause of Covid and it’s their only source of income to keep the studio open.

In this episode of In Focus by U Multicultural Mark Aaron sat down with Angel to talk about his thoughts on Covid 19 restrictions and how they affected his studio and his team.

In the month of 1995 February, Black history month was created, which honoured Black Canadians. Black people and the communities have been a part of shaping Canada’s heritage and identity. But in 2021, their human rights and many other cultures are still being tested to this day. On May 25, 2020, a man named George Floyd was arrested by Minneapolis police officers. They pinned George Floyd to the ground, and one officer had his knee on his neck. Seventeen minutes later, George Floyd was unsound and unresponsive. After the George Floyd incident, everyone in the world and here in Winnipeg started the Black Lives Matter in memory of George Floyd and many others who lost their lives cause of police misconduct.

Many cultures get overshadowed by other cultures here in Winnipeg. 21.1% of Winnipeg residents are English ethnic. Whereas Polish is 7.8% are polishing ethnic. Winnipeg’s 2021 population is now estimated at 824,771. Winnipeg is very cultured every year with its yearly event Folklorama.

Folklorama promotes the ethnocultural diversity of Manitoba through entertainment and public celebrations of culture and education. But with COVID-19, they had to change how they promote Winnipeg’s cultures and ethnicities by doing online presentations and interactions. In this episode of In Focus by U Multicultural, Mark Aaron interviewed the director of Folklorama Tanya Williams on what changes they made to follow the COVID-19 restrictions and how to bring more cultural awareness to and as well the plans for 2021 and the future if the restrictions don’t get lighten up.

COVID-19 affects everyone in the world today. People are losing jobs, not visiting love ones, and not getting the school experience they need. With the restrictions, teachers of Winnipeg had to limit their class sizes and resort to online teaching.

The students have had to learn from home through their webcam and learn stuff on their own, limiting some students because some students are hands-on learners. In this episode of In Focus by U Multicultural, Mark Aaron interviewed some staff and students of Louis Riel Arts and Technology Centre. We sat down to get their perspective on how COVID-19 affected the school and what changes they had to follow.

Every year we have Folkorama that runs two weeks in Winnipeg. Folokorama is an event where people get to explore many different cultures that Winnipeg has to offer. But after the event, people forgot about them. On January 19, 2021, the Canadian Museum for Human Rights hosted a free online event to explore how the global pandemic has put human rights at risk.

Ambassadors to Canada from the Nordic countries of Denmark, Finland, Norway and Sweden participated in this event. They discussed the Nordic experiences and then needed global vigilance and cooperation to combat the effects of COVID-19. In Focus by U Mulitcuturual, hosted by Mark Aaron, got a chance to interview Ambassador of Sweden to Canada Urban Ahlin. Ahlin previously served as a Politician representing the Swedish Social Democratic. He was a member of Parliament from 1994 to 2018. We discussed how COVID-19 affects our Human Rights and how to grow more Swedish cultural awareness in our Winnipeg community.

COVID-19 has a significant effect on our world today. It has been going on for about a year now, and everyone in the world has been affected by it one way or another. stores have been closed down, and people are losing jobs or can’t make an annual income. With the effects of Covid 19 they’re has been a growing increase number of homeless people in Winnipeg. Shelter homes have to follow the restrictions, limiting how many people can stay in the building.

Siloam’s mission is a Christian humanitarian organization, and it connects the community to alleviate hardships and provide opportunities for change for those affected by poverty and homelessness. Mark Aaron talked to Luke Thiessen, an Siloam Mission employee. Thiessen spoke about his perspective on the growing number of homeless people and how Siloam Mission is handling the restrictions.

This is it! Pretty simple, right?

DO YOU HAVE A STORY TO SHARE? WRITE US