I’m named after my grandfather, and it means ‘grizzly bear’ – Zeann Manernaluk 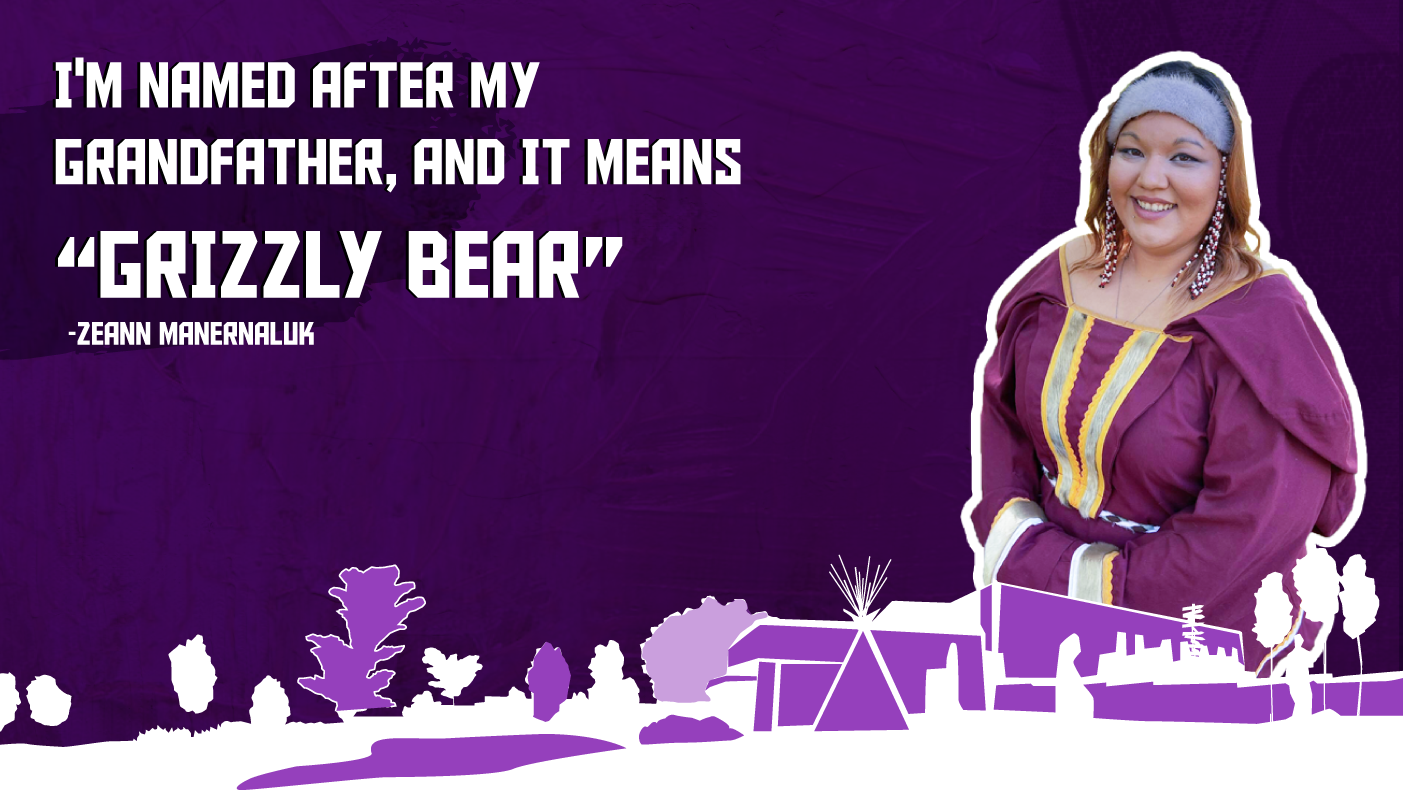 Spread out over 35% of Canada’s landmass and across 50% of its coastline, the Inuit people have been integral to Canada’s history. Inuktut is the language traditionally spoken among Inuit people. Winnipeg also has dedicated a centre for Inuit people to visit. Zeann Manernaluk is from a small community, on the shore of the Hudson’s Bay. She works at the Inuit centre in Winnipeg. Aside from her career – helping people in Manitoba, she is also a remarkable throat singer and a proud mom.

“AK&A (ah-clah) is my Inuktut name. I’m named after my grandfather, and it means ‘grizzly bear’. I’m from Rankin Inlet where I could always see the water of the Bay from my bedroom window. I moved down South to Winnipeg when I was eleven. There were only about five thousand people living there. It was great, everyone knew each other, and it was very safe. Fishing was popular. I remember catching a ton of minnows, as well as berry picking in Spring”, says Zeann.

Fond childhood memories of playing outdoors, ice fishing contests for Arctic char, and even sledding during the Winter. These are the experiences Zeann says she will always cherish. Zeann visited Rankin Inlet again after many years as an adult. She says the stark contrast of how her hometown felt as a child versus much recently, was noticeable. It wasn’t because the landscape changed, but because many of her friends had left the place. And also, because the social fabric is now completely different.

Zeann has a vocation with the Inuit centre here in Winnipeg and she has been a part of their team since 2009. She says, “It’s a medical boarding home at the centre. They house people who come from up north – down to Winnipeg for medical procedures. I’ve been a supervisor there for a few years. We provide people with transportation, a room to sleep in, and food. We schedule appointments and give people things like pampers and food. It’s rewarding and has been such a positive part of my life for the past decade. The overnight shift contains the most excitement. It’s because many women come to the centre, right before they are about to give birth. Sometimes, the children come sooner than expected before an ambulance can even take them to a hospital. This has motivated me to work a little bit outside my job description. I’ve delivered seven babies during my time there.”

Outside of her work and motherhood life, Zeann has a unique and polished talent. She is a talented Inuit throat singer. She shares, “I used to do a lot of performances all over Winnipeg. I’ve performed at the Millenium Library, Winnipeg Art Gallery, and Thunderbird house. My performances also include many graduation ceremonies. I have always encountered the same reaction from listeners. People say, ‘Oh my gosh, that’s so amazing, I’ve never heard that before!’ and, while flattering, it also makes me a little sad”.

She continues, “Inuit culture has been around for thousands of years. The throat singing techniques have been so core to our musical culture. To see how many people over the years haven’t heard about Inuit culture, heard our music and seen our traditional outfits, makes me uneasy. Yet, it also fills me with hope that I can reach out to many more people through it. I can show them both – who I am and who my people are.”

The government of Manitoba has released a test project plan to give the residential streets in Winnipeg City a better look into the future. The government’s goal is to lower the speed limit from fifty kilometres per hour to forty or even thirty to make the residential areas safe and END_OF_DOCUMENT_TOKEN_TO_BE_REPLACED

This winter has been one of the most interesting winters that Manitoba has ever faced. It started with very high temperatures, which surprised and confused many Manitobans. Then a couple of storms hit the province.  The weather continued to act weirdly warm, which got some of the winter activities companies END_OF_DOCUMENT_TOKEN_TO_BE_REPLACED

Inflation has been hitting Canada hard since the beginning of the year 2022. As the year progressed, inflation kept increasing and wasn’t getting any better. Many Canadians have difficulty feeding their families because their wages aren’t enough. Food prices and fuel prices, two of the critical things in a citizen’s END_OF_DOCUMENT_TOKEN_TO_BE_REPLACED

This year many jobs have been introduced to the citizens of Canada, many of them got full-time jobs, and the economists were expecting the economy of Canada to keep improving. However, a new survey done by Research Co. showed that two out of three Canadians are unhappy with Canada’s current END_OF_DOCUMENT_TOKEN_TO_BE_REPLACED