“High Profile” is a 5-piece Ukrainian-Canadian band that was formed in Winnipeg Manitoba 25 years ago by local musician Darren Gagaluk.  Since the band’s inception, they have recorded 3 Ukrainian CDs: “Traditionally Yours”, “…And The Zabava Goes On…” and “Tribute to Ukrainian Heritage.”  Both CDs have been featured on ethnic radio stations across Canada and even into the Unite States.  Each CD contains not just polkas and waltzes but latin beats, sambas and even contemporary rock/pop sounds.

“High Profile” was formed out of Darren’s love of his Ukrainian culture blended with contemporary Western musical culture.  All members of the band just appreciate the opportunity to perform for audiences with the intent for all to have a good time at an event…and that includes the band! 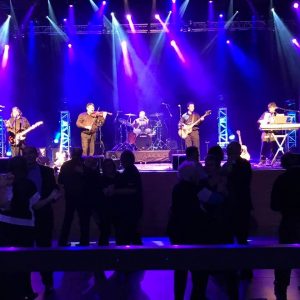 Some of the highlights of the “High Profile’s” live appearances include:

As “High Profile” has played many multigenerational functions over the decades, they play many Top 40 hits of the past & present, country rock, Celtic in addition to Ukrainian music.  Their repertoire has expanded in the last 5 years alone and continues to expand to cater to the younger generations.  Plus, all of the members of “High Profile” play, at least, two different instruments each allowing for unique performances not seen in many bands, in general.

Many music lovers have praised the band’s versatility.  For further information on the band, go to their website www.highprofileband.com or email darreng@mymts.net.  See you on the dance floor!

Do you want to be among one of Our Artists to share your art with the community?

GET IN TOUCH WITH US!