Health Inequity During the COVID-19 Pandemic 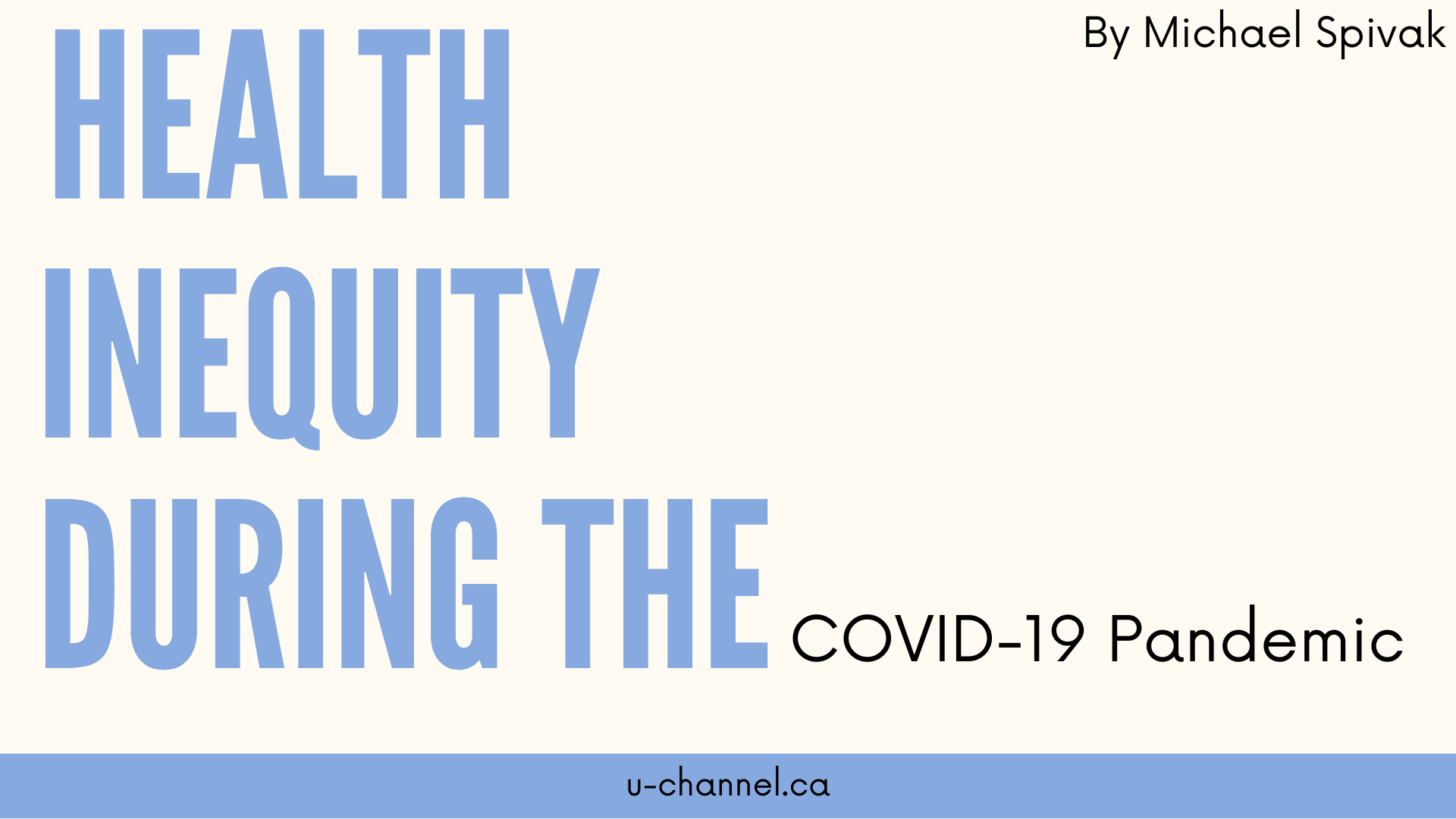 COVID-19 is preparing for a comeback after daily cases had decreased over the summer. Data coming from John Hopkins University of Medicine points towards the beginnings of a potential fourth wave of the virus this fall.

Reports posted on the official Government of Canada website show that daily cases are once again climbing in most provinces and territories. The national seven-day average is 2,407 as of Aug. 21, a 31.7 per cent increase from the previous week, with some exceptions.

By Aug. 31, 2021, 70.83 per cent of Manitobans had received at least one dose of a COVID-19 vaccine. Out of ten provinces, the highest vaccination percentage was in Prince Edward Island with 79.72 per cent and the lowest in Saskatchewan with 64.69 per cent. Out of the Territories, Yukon had the highest rate with 76.49 per cent while Nunavut had the lowest in all of Canada at 59.37 per cent.

Questions around health inequity arose amid the pandemic. Health inequity, as defined by the National Center for Biotechnology Information (NCBI), is “a specific type of health inequality that denotes an unjust difference in health . . . social group differences in health, such as those based on race or religion, are considered health inequities because they reflect an unfair distribution of health risks and resources.”

Stories put out by both the CTV and CBC on July 5 and 6, tell us that BIPOC (Black, Indigenous and People of Colour) individuals are at higher risk of getting infected and dying of Covid-19. This information is supported by a report released on July 5 by the Manitoba Government. In it, the highest infection rate was among the Southeast Asian community, being 21.72 times greater than the White population. BIPOC communities also had a higher per cent of hospitalizations, standing at 61.3 per cent, compared to the White population with 38.7 per cent. Additionally, the Government of Canada did its research and released their findings that found communities of visible minorities and/or recent immigrants had a higher COVID-19 death rate. Findings made by the Centers for Disease Control and Prevention (CDC) supports the Canadian Government’s reports. They emphasize the effects of housing, discrimination and income as important factors in health inequity and COVID-19 rates of infection and death.

Vaccinations were also different by community. According to the same Manitoba Government report mentioned above, “the average person from a BIPOC community admitted to hospital wasn’t eligible for the vaccine until 23 days later than the average white person admitted to hospital,” which means those cases and hospitalizations were preventable. Vaccine hesitancy is also a big factor in vaccination rates among communities. According to Statistics Canada, the Black community had the lowest willingness of getting a COVID-19 vaccine, followed by the Latin American, Arab and Inuit communities. The overall national willingness to get the vaccine is 76.9 per cent.

As of Aug. 31, Manitoba had a total of 58,710 cases out of 1,499,165 total for Canada. 77 per cent of Manitobans are fully vaccinated. Based on the above statistics, we see clear health inequity affecting communities. BIPOC communities are usually more affected than non-BIPOC, having higher infection and death rates and higher vaccine hesitancy.

Canada’s winters can be unpredictable. Here in Manitoba, one day, we can have lovely warm sun. The next, it can be blistering cold. Even those who have lived here their whole lives can get caught off-guard. One joke often used is that everyone forgets how to drive on the year’s END_OF_DOCUMENT_TOKEN_TO_BE_REPLACED

There’s been a bit of a road bump for one of Winnipeg’s North-End Community organizations as they look for a new facility. Luckily, there are opportunities to rent while they search, a testament to the unity found within the community. Founded in 1999 by a group of women who came END_OF_DOCUMENT_TOKEN_TO_BE_REPLACED

The end of the year is a busy time. From October to January, there are many observed festivities. Diwali, Dio De Los Muertos, Hanukkah, Christmas, Ōmisoka, and Kwanzaa. Established in the 1960s, Kwanzaa found its way to Canada in the 1990s. Thanks to the Canadian Kwanzaa Association, 2019 was the END_OF_DOCUMENT_TOKEN_TO_BE_REPLACED

Volunteering has many beneficial purposes, helping develop your skills, enhance your resume, build connections and help support your community.  There are plenty of opportunities for students through school, youth groups, student initiatives, or community ventures. When you’re retired, your history in the community and having more availability can make it END_OF_DOCUMENT_TOKEN_TO_BE_REPLACED

Islam is a faith followed by approximately a quarter of the world’s population and comprises many diverse cultures and ethnicities. The Islamic community also has a deep connection to Manitoba, with the Mosque run by the Manitoba Islamic Association (MIA), the oldest and largest in Manitoba. Since moving to Canada END_OF_DOCUMENT_TOKEN_TO_BE_REPLACED

In ancient Greece, it was believed the Muses, Greek deities of song, dance, and memory, would give creativity, wisdom and insight to artists and thinkers.   In the modern-day, the generations of great thinkers and creators may never come to be if they are not provided with the proper resources, teaching, END_OF_DOCUMENT_TOKEN_TO_BE_REPLACED