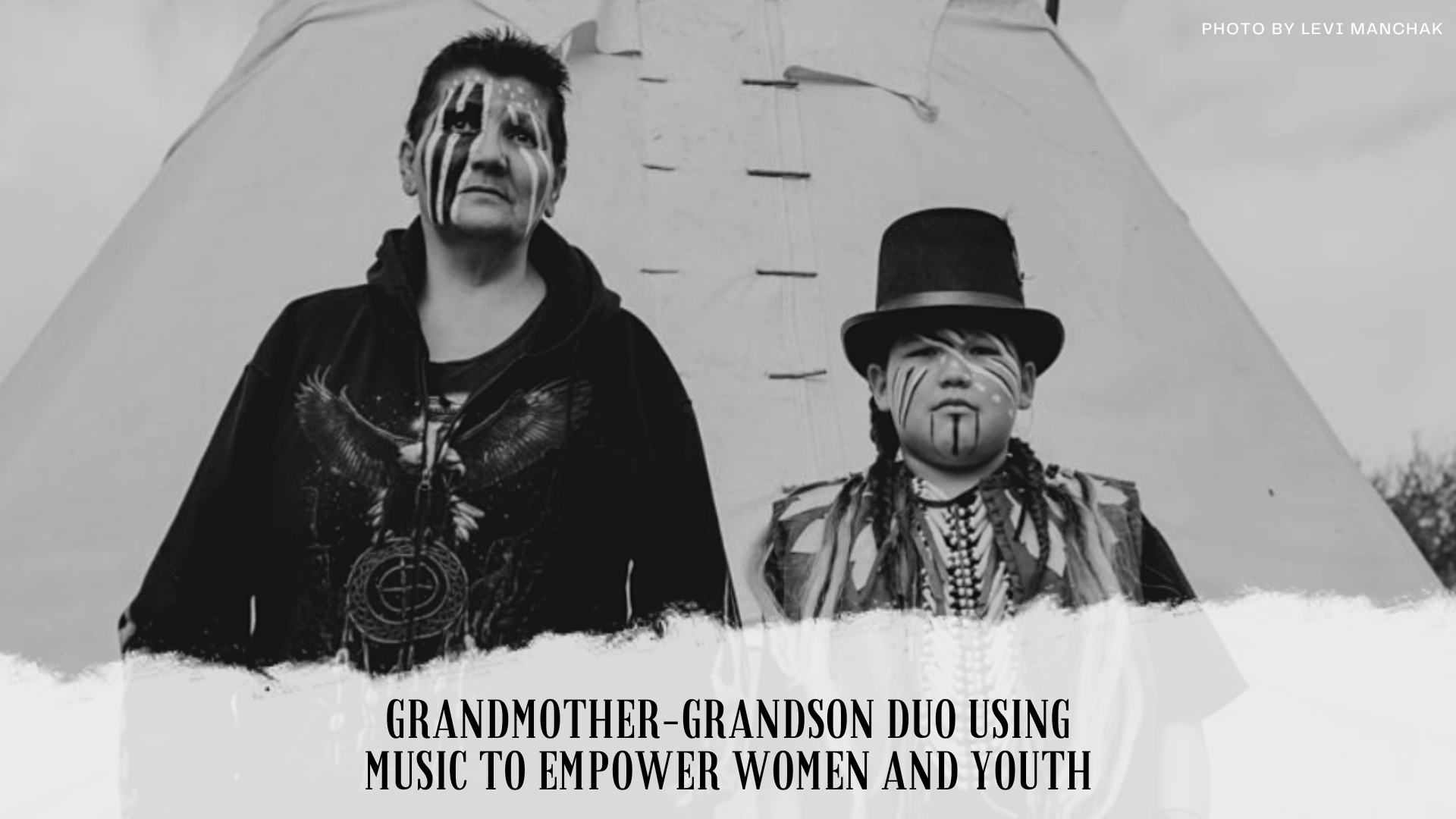 Chubby Cree is a Grandmother-Grandson music group using the healing power of music to empower women and youth and increase awareness of social issues across their hometown of Edmonton.

The founder of Chubby Cree Carol has taught her family how to drum. Raising her grandchildren, she noticed young Noah had a unique talent early on. He sang at eight months old and was given his drum not too long afterwards. Noah has been playing live since the age of two several years. With the song “Rock Your World,” gifted to young Noah, the duo blew up on social media. On Tik Tok alone, the video has received over 5.7 billion views.

“We got calls and messages from Brazil, Italy, the UK… Basically, I think we reached the world,” says Carol. “We’ve worked hard to get where we are, and I did it on my own. I did it for us. When we walked out of the house 11 years ago, I knew we wanted to sing to the world.”

Noah’s powerful voice echoes as he performs on stage, with confidence and pride, as he sings his song at traditional powwows, events supporting women’s and other marginalized communities’ rights, and environmental initiatives. A big moment for Chubby Cree was in 2019 when they opened for environmental Greta Thunberg at the Alberta legislative building in front of a crowd of 5,000. When he sings, Noah knows he is helping others be strong. Seeing other youth like Thunberg taking the initiative, with a passion for improving the environment and conditions for everyone, Noah couldn’t help but be inspired.

“It was fun and amazing. It’s so cool seeing other kids doing the same things we’re doing. It’s good.”

With ten other family members in one home, Chubby Cree regularly practices and performs together, a testament to Carol’s vision of bringing future generations to the drum and teaching them the importance of connecting to the land, lessons taught to her by her grandfather. She takes this knowledge and share’s it with others, wanting to bring back their culture, which was brought to the brink.

“Many of our Natives are lost today, and I want to bring them back, says Carol/ “If they want a teacher, tell them to come to see Chubby Cree, we’ll teach them.”

Carol experienced firsthand discrimination and torment from her peers when in school. However, through that tribulation, she found strength, a strength she wishes to share with other Indigenous communities so they too can heal. “For all you children in that school who used to pick on us and call us savages. All the names you called us. It hurt, but we stood strong. We’re still here.”

Carol encourages anyone wanting to talk to reach out to Chubby Cree over social media as they try to reply to as many people as possible. The Group continues to travel to events utilizing their drums and singing to heal the world, one person at a time.

A gofundme campaign is available to help Chubby Cree Travel Across Canada.

The government of Manitoba has released a test project plan to give the residential streets in Winnipeg City a better look into the future. The government’s goal is to lower the speed limit from fifty kilometres per hour to forty or even thirty to make the residential areas safe and END_OF_DOCUMENT_TOKEN_TO_BE_REPLACED

This winter has been one of the most interesting winters that Manitoba has ever faced. It started with very high temperatures, which surprised and confused many Manitobans. Then a couple of storms hit the province.  The weather continued to act weirdly warm, which got some of the winter activities companies END_OF_DOCUMENT_TOKEN_TO_BE_REPLACED