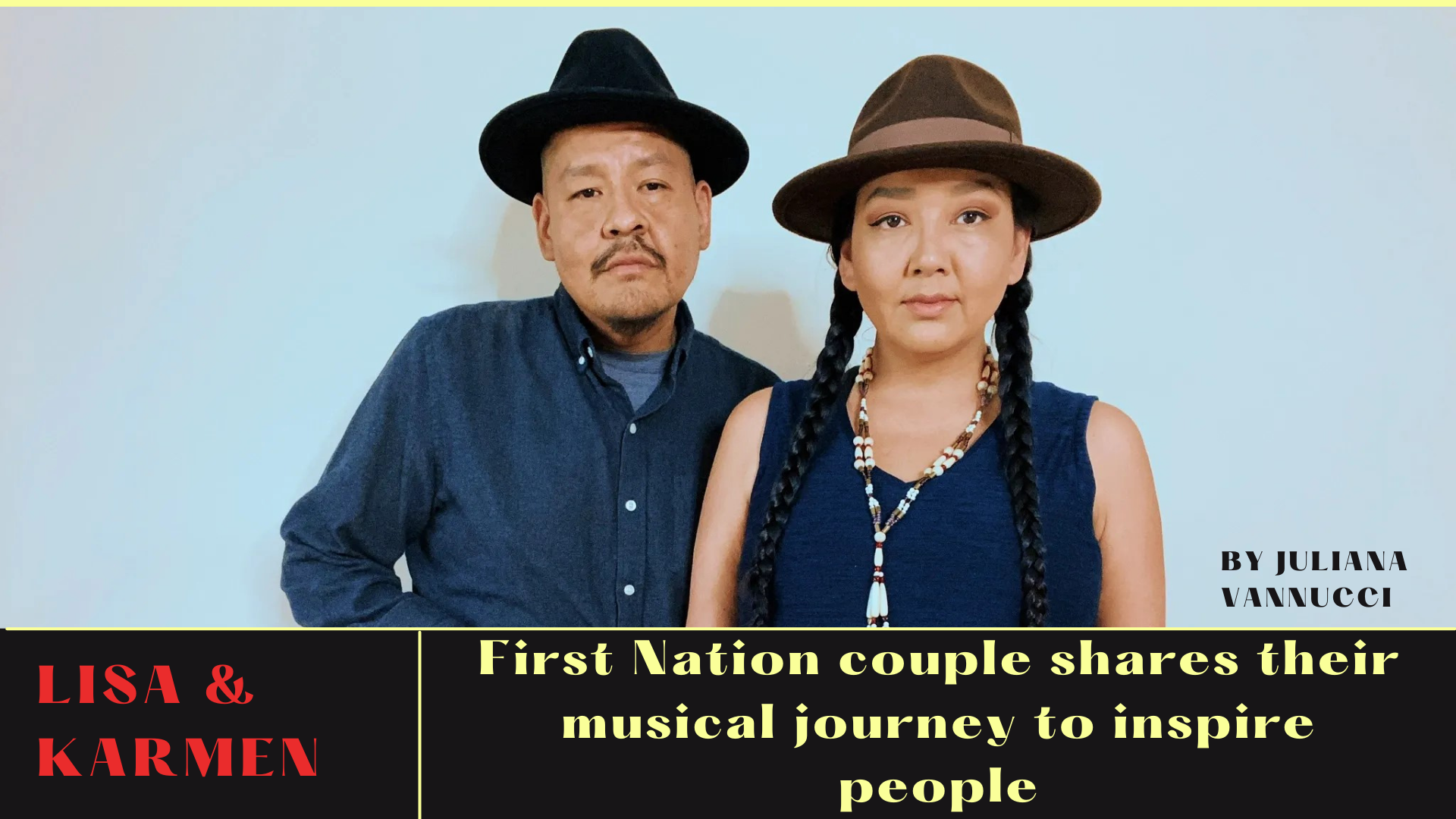 “When she walked in, everything just kinda blurred out and I just focused on her the whole time,” said Karmen Omeasoo about meeting his wife for the first time.

Karmen Omeasoo, also known as Hellnback, is a hip-hop artist from Samson Cree Nation in Alberta. He is one of the founding members of the group “War Party,” established in 1995.

“We (War Party) had to break the market and we had to make the market, because there were no native rappers before,” said Hellnback.

The band really blew up when they started making music videos for their songs, and soon enough, they had shows getting booked left and right.

“Coming from the reservation, we wanted to prove to people that it can happen,” he said. “We turned our hobby into a lifestyle, and that lifestyle into a movement.”

Hellnback met his wife, Lisa Muswagon, in the audience of one of their concerts when the band came to Winnipeg to perform back in the day. Muswagon is a contemporary hand drum singer and songwriter from Nakoda Cree member of the Pimicikamak Cree Nation, or Cross Lake, in Northern Manitoba. She started playing at a young age after her dad gave her the instrument as a Christmas gift and later decided to explore singing and writing. After her cousin passed away from kidney failure, Muswagon decided to go back to university and start working and producing her first album at the same time.

“We grew up very closely when I lived back home in my community, so to have a loss like that was tremendous for me,” she said.

Hellnback’s father also suffered from the same condition, which led him to be raised by his older brother. His brother became his role model and introduced him to the music world. Now, Hellnback himself was diagnosed with kidney failure in July of 2019. The family decided it was important to share their journey with their friends and fans.

“We wanted to educate people and bring more awareness,” he said. “It’s not a death sentence, and we want people to understand that.”

The couple has been using social media to help spread the message, both about health concerns and the musical challenges Indigenous communities face. They’ve been getting a lot of support from younger activists on TikTok, who are slowly helping society change its mindset on several issues.

“We just have to continue to trailblaze and make way for our upcoming generation, because they are loud,” said Muswagon.

Canada’s winters can be unpredictable. Here in Manitoba, one day, we can have lovely warm sun. The next, it can be blistering cold. Even those who have lived here their whole lives can get caught off-guard. One joke often used is that everyone forgets how to drive on the year’s END_OF_DOCUMENT_TOKEN_TO_BE_REPLACED

There’s been a bit of a road bump for one of Winnipeg’s North-End Community organizations as they look for a new facility. Luckily, there are opportunities to rent while they search, a testament to the unity found within the community. Founded in 1999 by a group of women who came END_OF_DOCUMENT_TOKEN_TO_BE_REPLACED

The end of the year is a busy time. From October to January, there are many observed festivities. Diwali, Dio De Los Muertos, Hanukkah, Christmas, Ōmisoka, and Kwanzaa. Established in the 1960s, Kwanzaa found its way to Canada in the 1990s. Thanks to the Canadian Kwanzaa Association, 2019 was the END_OF_DOCUMENT_TOKEN_TO_BE_REPLACED

Volunteering has many beneficial purposes, helping develop your skills, enhance your resume, build connections and help support your community.  There are plenty of opportunities for students through school, youth groups, student initiatives, or community ventures. When you’re retired, your history in the community and having more availability can make it END_OF_DOCUMENT_TOKEN_TO_BE_REPLACED

Islam is a faith followed by approximately a quarter of the world’s population and comprises many diverse cultures and ethnicities. The Islamic community also has a deep connection to Manitoba, with the Mosque run by the Manitoba Islamic Association (MIA), the oldest and largest in Manitoba. Since moving to Canada END_OF_DOCUMENT_TOKEN_TO_BE_REPLACED

In ancient Greece, it was believed the Muses, Greek deities of song, dance, and memory, would give creativity, wisdom and insight to artists and thinkers.   In the modern-day, the generations of great thinkers and creators may never come to be if they are not provided with the proper resources, teaching, END_OF_DOCUMENT_TOKEN_TO_BE_REPLACED