Changing the Narrative to Include Males as Victims of Trafficking

In areas of violence and sexual exploitation, males are often eliminated in the equation when considering the victims of these cases. Ordinarily, they are most likely known to be perpetrators of sexual harassment due to societal standards that hold the biological male accountable for aggression and domination. Likewise, females are less considered to be suspects of assault due to their subordinate positions, and thus their weaker sex trait making them prone to be victims as perceived by society.

This overall skewed generalization is the root of all the problems faced by male victims and survivors of trafficking. Nonexistent conversation in this area for males leads to a lack of need for research and education in this topic, and thus a diminished need for funding by the government. With these issues in mind, this article is aimed to address them to change the narrative and increase the conversation surrounding male victims of human trafficking.

Open the Conversation to Raise Awareness

To gain awareness and to ensure the accessibility of help for males, the first step is to open the conversation normalizing males to be included as victims of violence and sexual exploitation. As males are often left out of the conversation due to the misrepresentation of masculinity, according to The Canadian Centre To End Human Trafficking, “a male that has been exploited by other men, as if often the case, [has] increase shame, fear and confusion [that] prevents them from speaking out.”

Moreover, “despite facing significant trauma as a result of sexual exploitation, research indicates that males will often wait for longer than females to disclose sexual violence and to seek help.” The inability to speak out or seek help derives from the lack of conversation that ascertain males as victims. Hence, male victims and survivors occupy the mindset that help is inaccessible due to this unapproachable topic, leaving recovery in their own hands, which can lead to a lifetime of psychological trauma.

Why Research, Education and Funding are Vital

Opening up the conversation opens up the demand to educate the population; entrusting higher authorities and charitable persons to allocate funding for research and resources for male survivors of human trafficking and general sexual harassment. Because of “a lack of education and awareness that males can be victims of this crime, […] community members, caregivers, and helping professionals are less likely to recognize the signs of human trafficking and exploitation when interacting with a male survivor.”  In essence, research and education for male trafficking victims are almost nonexistent, leaving them defenceless due to their exclusivity in the standardized spectrum of victims.

“Despite the lack of reliable sex trafficking specific data for males in Canada, the majority of research, organizations, and advocacy groups agree on the fact that sexual violence [including sex trafficking] perpetrated against males is vastly under-reported.” The inability to share their trauma and the unrecognized signs of scarred male victims flaws the system of collecting accurate data with the little research made available. Changing the narrative to include male survivors and victims plays a huge role in altering this whole distorted system to support and provide resources for them instead.

To help male victims and survivors of trafficking, the issue should be raised to create resolutions and have a better support system in place. Resolutions include: advocating for funding in research, education and services, safe housing, and most importantly, challenging the narrative of sex trafficking to include males as victims, and not solely as perpetrators.

Inflation has been hitting Canada hard since the beginning of the year 2022. As the year progressed, inflation kept increasing and wasn’t getting any better. Many Canadians have difficulty feeding their families because their wages aren’t enough. Food prices and fuel prices, two of the critical things in a citizen’s END_OF_DOCUMENT_TOKEN_TO_BE_REPLACED

This year many jobs have been introduced to the citizens of Canada, many of them got full-time jobs, and the economists were expecting the economy of Canada to keep improving. However, a new survey done by Research Co. showed that two out of three Canadians are unhappy with Canada’s current END_OF_DOCUMENT_TOKEN_TO_BE_REPLACED 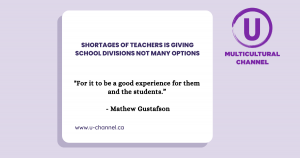 Manitoba is struggling with many staff shortages in many different trades and essential tertiary jobs. Manitoba has been working towards finding more medical staff because of the extreme health care providers’ low numbers. Since the beginning of this school year, there has been a very low number of substitute teachers, END_OF_DOCUMENT_TOKEN_TO_BE_REPLACED 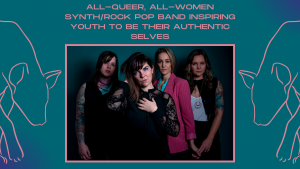 Seeing someone unabashedly be their authentic self can be incredibly motivating and exciting. There’s no better example than the all-queer, all-women synth/rock pop band Hyaenas. Sophie Heppell (guitar, vocals), Jessie Robertson (bass), Jen Foster (drums) and Luvia Petersen (synth) are the Hyaenas. The group often jokes about the name, “We END_OF_DOCUMENT_TOKEN_TO_BE_REPLACED 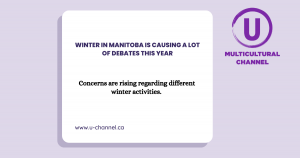 Winter started very easy and quite nice on Manitobans, the temperatures were fine, and there weren’t many snow storms or heavy snowfalls. Although the weather got worse in December and many storms were happening in the neighbouring provinces, Manitoba was getting only very low temperatures. From the start of January, END_OF_DOCUMENT_TOKEN_TO_BE_REPLACED