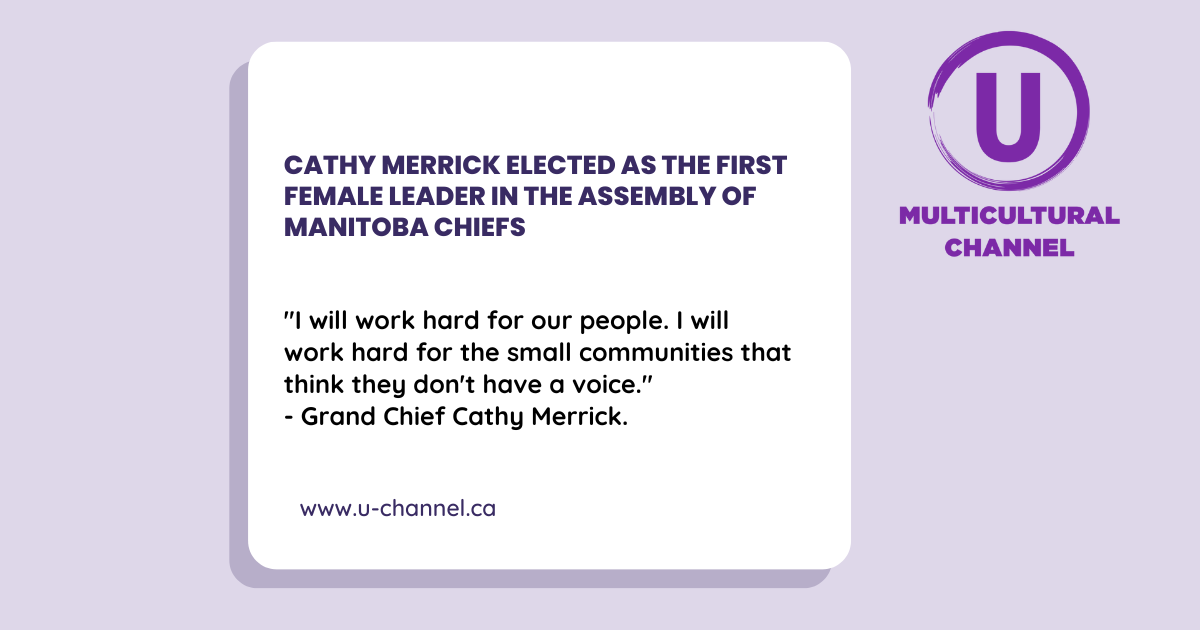 In almost thirty-five years of history, a female will lead the Assembly of Manitoba Chiefs, and many are proud and looking forward to the new achievements that she will accomplish. Cathay Merrick was the candidate with the most votes, earning thirty-seven votes out of fifty-nine in the election process.

Cathy Merrick was embraced by many of her supporters and family members after she was announced as the election’s winner. She commented on how she got very emotional and how she is very thankful for all the support. “I just put my head down. I gave thanks to the creator for putting me where I needed to be to be able to lead our chiefs with their support,” Cathy Merrick added.

What is impressive and unique is that she became the first woman to lead the Assembly of Manitoba Chiefs. With her hard work and people’s honest support, she became the Grand Chief. “I’m so honoured that the chiefs believed in me to be their leader, to be the first woman chief of the Assembly of Manitoba Chiefs … I will do them proud with the work that I want to do.” Cathy Merrick said.

Cathy Merrick mentioned that her background as a health adviser will help her condition the modern problems and that one of her priorities is to be able to make good health care accessible for everyone.

The holiday season is approaching, winter is getting more serious, and many struggling Manitobans are trying to have good wintertime. Harvest Manitoba has reported that the number of Manitobans with food insecurity has grown recently. According to the data collected by Harvest Manitoba, food bank usage has doubled since 2019. END_OF_DOCUMENT_TOKEN_TO_BE_REPLACED

https://youtu.be/wQhEjmKNpTY It can sometimes feel disheartening to hear what’s happening worldwide. When it comes to politics, things are more divisive than ever. On November 24, Winnipeggers stood together to make a difference, marching for the Take Back the Night (TBTN) movement.  The first ever Take Back The Night event was END_OF_DOCUMENT_TOKEN_TO_BE_REPLACED

After long years of debates, discussions, and delays, the government of Canada released a new bill called C-7 in 2021. Bill C-7 has legalized assisted death for patients with incurable diseases or patients with irreversible comas. The Bill contained very detailed rules, but this Bill has some things that are END_OF_DOCUMENT_TOKEN_TO_BE_REPLACED