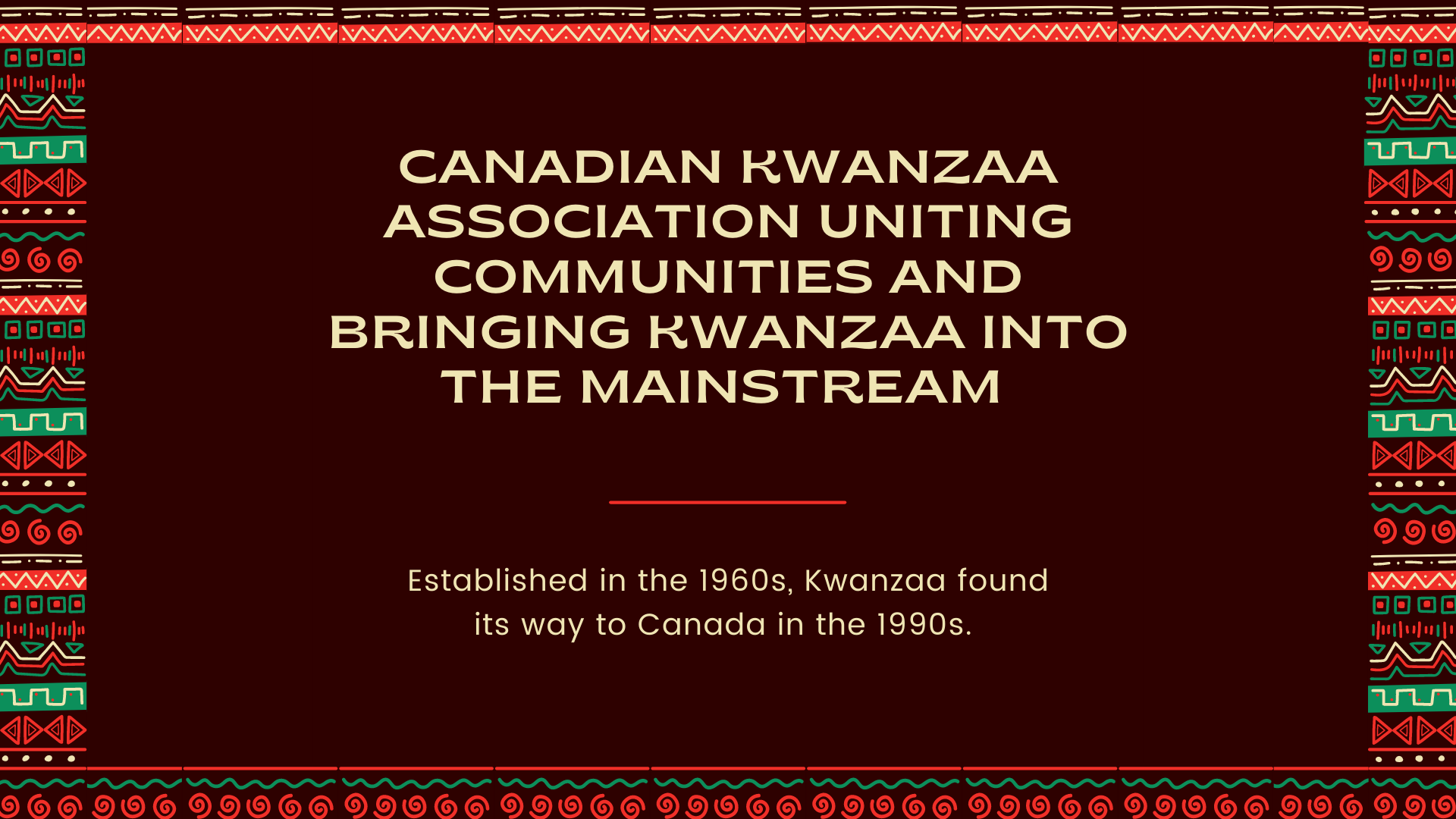 The end of the year is a busy time. From October to January, there are many observed festivities. Diwali, Dio De Los Muertos, Hanukkah, Christmas, Ōmisoka, and Kwanzaa.

Established in the 1960s, Kwanzaa found its way to Canada in the 1990s. Thanks to the Canadian Kwanzaa Association, 2019 was the first Kwanzaa week in Canada at Nathan Phillips Square in Toronto. The first time a municipality in Canada had recognized the practice. However, according to Dewitt Lee III, Founder of the Canadian Kwanzaa Association, since the Internet was only in its infancy, there isn’t much documentation you can find about the origins here.

“That’s one thing in our history we need, and we definitely need to do a better job at that so we can celebrate those who came before us.”

The non-denominational practice is represented with black, red, and green, a symbol of unity for people of African descent worldwide; black for the people, red for the noble blood that unites all people of African ancestry, and green for the rich land of Africa. The seven candles of Kwanzaa represent seven principles derived from Swahili; Umoja (unity), Kujichagulia (self-determination, Ujima (collective work and responsibility), Ujamaa (cooperative economics), Nia (Purpose), Kuumba (creativity), and Imani (faith). Dr. Maulana Karenga founded the seven-day holiday for the diaspora of Africans in America, says Lee, and can give an annual perspective on the seven principles of this harvest celebration.

“To have the founder and the source to continue to sow into what he feels is relevant in interpreting these ceremonies is an amazing honour. Although people are free to express themselves and celebrate in their own way, we always turn to the source and founder, Dr. Karenga, to give his annual perspective, and so every year is different.”

Lee adds that whether an individual has a Caribbean or African background, these communities and families bring a unique flavour and approach to Kwanzaa, but with unifying principles and elements and creating these united communities.

That’s where the Canadian Kwanzaa Association can help, uniting communities and bringing Kwanzaa more into the mainstream of Canada and the world.

“To grow our footprint across Canada, to be able to have more municipalities supporting it, to be accessible to media outlets for those who would like information, and to add a Canadian contribution to it,” says Lee. ” That’s what I would like to see where other cities in other countries around the world, and say, ‘hey, this is what their doing in Canada, maybe we should incorporate that here.'”

Although local celebrations at the Canadian Kwanzaa Association have had to be held virtually, Lee has seen the positives with doors being opened thanks to the Internet. To celebrate with people across Canada and worldwide and is excited when in-person events can occur again.

The government of Manitoba has released a test project plan to give the residential streets in Winnipeg City a better look into the future. The government’s goal is to lower the speed limit from fifty kilometres per hour to forty or even thirty to make the residential areas safe and END_OF_DOCUMENT_TOKEN_TO_BE_REPLACED

This winter has been one of the most interesting winters that Manitoba has ever faced. It started with very high temperatures, which surprised and confused many Manitobans. Then a couple of storms hit the province.  The weather continued to act weirdly warm, which got some of the winter activities companies END_OF_DOCUMENT_TOKEN_TO_BE_REPLACED