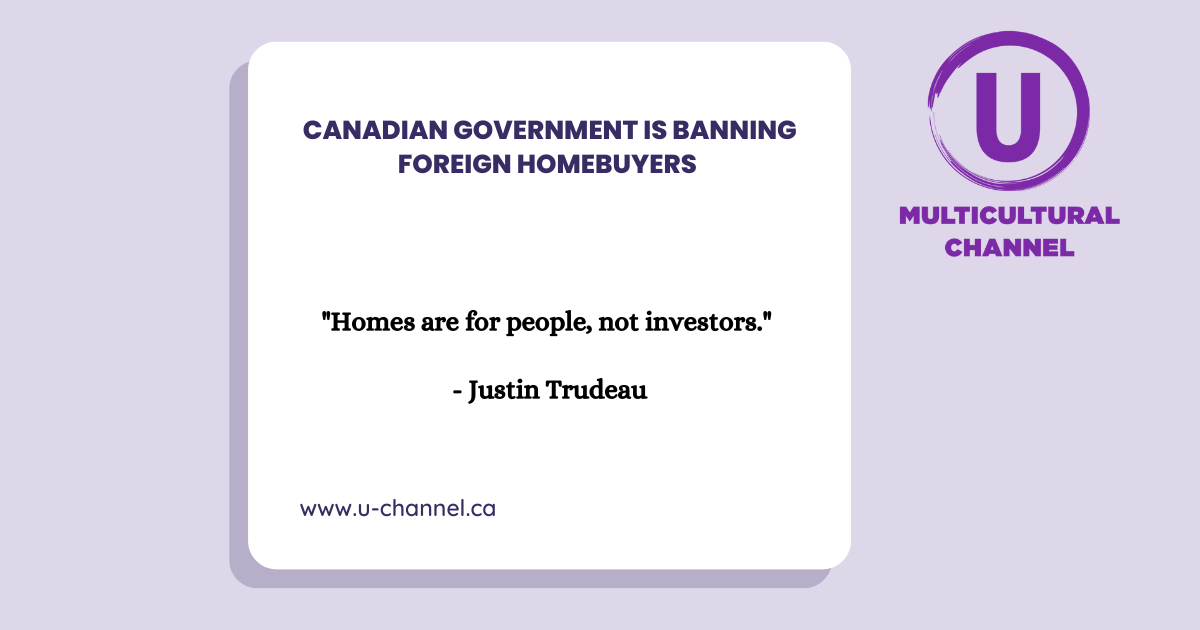 Canadians have noticed a massive increase in house prices after the pandemic in 2020, and the government figures foreign buyers using the supply of homes as an investment.

The government has decided that this is a considerable disadvantage for all Canadians and has made a new rule banning foreign buyers from buying houses in Canada. This is believed to decrease the spike in Canadian home prices.

“The desirability of Canadian homes is attracting profiteers, wealthy corporations, and foreign investors. This is leading to a real problem of underused and vacant housing, rampant speculation, and skyrocketing prices. Homes are for people, not investors,” said Prime Minister Justin Trudeau.

The Canadian Real Estate Association has commented on this by saying, “Canada has built a reputation as a multicultural nation that welcomes people from around the world. As currently proposed, the prohibition on the purchase of residential property by non-Canadians can impact our reputation as a welcoming nation. The potential benefits of the ban are likely to be modest.”

From this year onward, only Canadian citizens and some non-citizens exceptions are allowed to buy real estate in Canada. Buyers that break the new law will be faced with hefty fines. This law was discussed by the government last year’s June as a response to the very high prices for houses in cities all over Canada and has become a permanent law at the beginning of the year 2023.

“Through this legislation, we’re taking action to ensure that housing is owned by Canadians, for the benefit of everyone who lives in this country,” said Canada’s minister of housing and diversity and inclusion, Ahmed Hussen, in one of his statements.

According to 2020 data from Statistics Canada, all surveyed provinces saw non-resident ownership rates in the single digits.

The government of Manitoba has released a test project plan to give the residential streets in Winnipeg City a better look into the future. The government’s goal is to lower the speed limit from fifty kilometres per hour to forty or even thirty to make the residential areas safe and END_OF_DOCUMENT_TOKEN_TO_BE_REPLACED

This winter has been one of the most interesting winters that Manitoba has ever faced. It started with very high temperatures, which surprised and confused many Manitobans. Then a couple of storms hit the province.  The weather continued to act weirdly warm, which got some of the winter activities companies END_OF_DOCUMENT_TOKEN_TO_BE_REPLACED