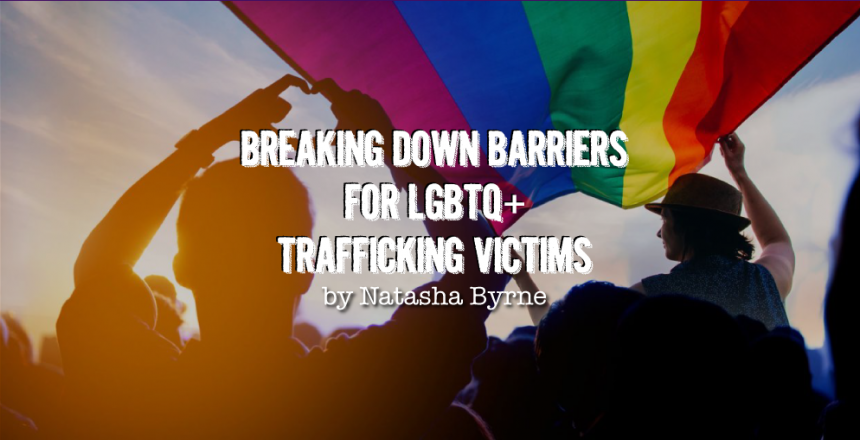 The sex trafficking victims that are part of the lesbian, gay, bisexual, transgender, queer, or questioning (LGBTQ+)  community often face a lack of resources to help them out of forced sex and violence. Along with this, they are also victims of the problematic law enforcement that does not identify them as victims, but as criminals. There is also a barrier of understanding with LGBTQ+ victims, as they are conceptualized to not be exploitable compared to cisgender women; thus, research and data on this group are limited in this area of the topic. This makes one’s need for education on this community’s involvement in trafficking to be almost inaccessible to fulfill.

Societal Discrimination as the Primary Cause

The “why” of the problem roots from the injustice system for persons of this community. Primarily, their inability to access employment and basic resources such as healthcare is due to the hostility of potential employers and society as a whole when realizing their gender identification. Polaris Project is a nonprofit organization in the United States that recognizes this community as susceptible victims to trafficking: “[y]outh who identify as [LGBTQ+] often face discrimination and homelessness – two factors that make them especially vulnerable to traffickers.”

Homelessness is a big factor in LGBTQ+ victims’ involvement in trafficking, because they are disqualified from jobs due to society’s misperception of two “appropriate” genders. From the Journal of Human Trafficking, “scholars have linked pervasive employment discrimination trans people commonly face to engaging in sex work as a survival strategy.” Although sex work is not to be confused with human trafficking, this is the risky gateway for persons of the LGBTQ+ community to unintentionally become involved in horrific psychological and sexual acts for no income.

A skewed concept that has been legally established is the inability to recognize victims of the LGBTQ+ community, namely trans victims who identify as women. “The invisibility of trans people among recognized victims of trafficking is rooted in the Palermo Protocol’s implied characterization of the ideal trafficking victims as a cisgender women and exacerbated by the anti-trafficking movement’s persistent failure to recognize trans women as women.”

Thus, the sad reality of victim blaming becomes the rescue tactic. Not only are victims locked in the psychological trauma that was their reality while being trafficked, but they are now literally imprisoned with criminal offences of “participating” in the illegal sex trade. “When they manage to break free of trafficking situations, they often still face substantial barriers including lack of appropriate social services and discrimination within the criminal justice system.” Consequently, victims find it difficult to embed in normal civilization and find themselves as targets in trafficking again.

Inclusivity as a Resolution

In order to overcome the problem of LGBTQ+ members as being indefensible in this issue, there needs to be bigger solutions in place. Fundamentally, the laws in place should alter to fit them as victims in the victim paradigm, and not enacting a criminal offence. Not only will this eliminate ignorance, but it will recognize LGBTQ+ as targets, assuring more research in this area. What is more, basic resources such as housing and employment should be extended to LGBTQ+ members to decrease discrimination. Lastly, there should be organizations that focuses on reaching out to LGBTQ+ victims of human trafficking. “In particular, participants [find] services with a health or legal focus particularly useful, and they prefer organizations specifically designed or run by other [members of their group] where they [feel] more respected and accepted.”

The government of Manitoba has released a test project plan to give the residential streets in Winnipeg City a better look into the future. The government’s goal is to lower the speed limit from fifty kilometres per hour to forty or even thirty to make the residential areas safe and END_OF_DOCUMENT_TOKEN_TO_BE_REPLACED

This winter has been one of the most interesting winters that Manitoba has ever faced. It started with very high temperatures, which surprised and confused many Manitobans. Then a couple of storms hit the province.  The weather continued to act weirdly warm, which got some of the winter activities companies END_OF_DOCUMENT_TOKEN_TO_BE_REPLACED