A Stand Against Asian Hate 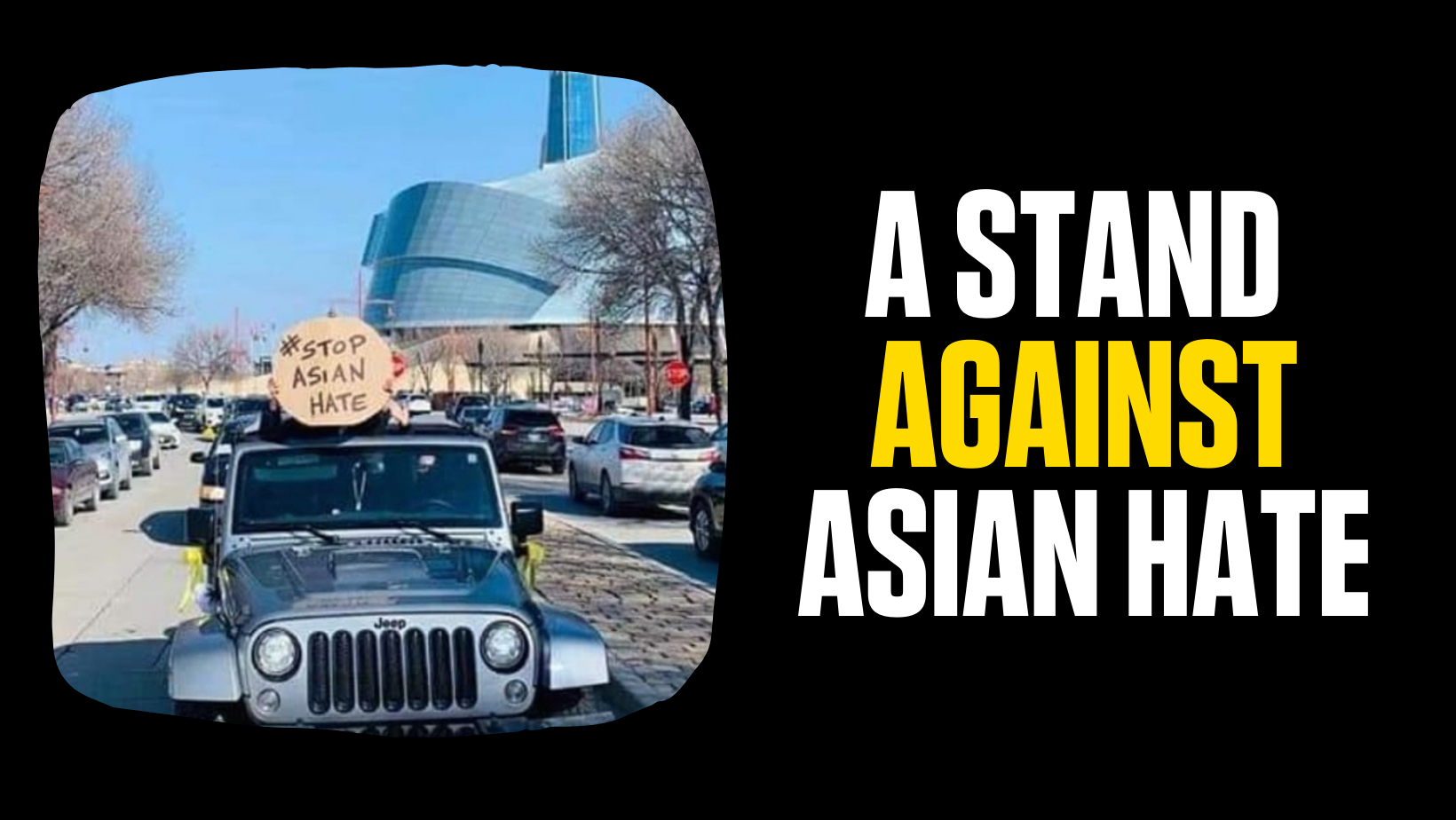 With the ongoing pandemic, we’ve seen an increase in racism and hate crimes against Asians.

On March 27, a Stop Asian Hate Rally took place in Winnipeg, Manitoba, organized by the Women of Colour Community Leadership Initiative Manitoba and Manitoba Chinese Family Centre. The event was a drive-by protest to ensure COVID-19 health guidelines could be maintained, while still bringing awareness to the cause.

Jié Yang is a board member of the Asian Heritage Society of Manitoba, which helped promote the event.

“It was nice seeing people of all backgrounds showing their support. It was incredibly emotional for some Asian people, including myself. After witnessing everything happening in the United States, particularly the Atlanta mass shooting and shootings in some parts of Canada, it was helpful to see that support and know there are people who hear our voices and are allies.”

According to a report by the Chinese Canadian National Council and Fight COVID Racism, from March 10, 2020, to February 28, 2021, 1150 cases of racist attacks from across Canada were reported on their platforms, 835 on covidracism.ca, and 315 to elimin8hate.org. Data analysis was conducted using data up to December 31, 2020.

Jié says although they have heard reports of increases in anti-Asian racism and discrimination in Manitoba, luckily, nothing has heightened into violence. However, he is still quite concerned for senior populations’ wellbeing after seeing the horrific Attack on an Asian-American woman in New York.

“There are a lot of senior citizens that are walking on the street and being attacked. I sometimes worry when my parents are going out, and I feel I have to warn them to be careful. It’s incredibly stressful for me and others. Anything could happen, especially at that age, and if they get pushed or knocked down, they could have to go to the hospital. I’m glad that Manitoba hasn’t escalated to violent racism.”

In this day and age, Jié believes racism is counterproductive to our society, and everyone is trying to succeed and build a life. Discrimination and racism solely created fissures between communities and tears everything down. Awareness and education are the tools to combat contempt and, through them, benefit all, and that’s the intent of the Asian Heritage Society of Manitoba.

The Asian Heritage Society of Manitoba hosts events celebrating Asian culture and heritage, but they have had to switch to virtual settings due to the pandemic. With Asian Heritage month approaching in May, the organization will have Asian showcases every few days, with videos highlighting the many cultures represented within their membership, and participating in high school symposiums, sending out various programming. The group is also well known for their Asian Film nights, and this year will celebrate by showcasing works from within the community from their film contest.

“People in Manitoba, whether they are a social media influencer or a filmmaker, can make a video discussion and win a cash prize. The best films will be shown at the Asian Film night at the end of May. It doesn’t have to be high-end production, and we’re also looking for candid videos. As long as it has a powerful message, that can win the contest as well.”

Participants should make a 3-5 minute short film with a theme and/or story about experiencing anti-Asian racism or educates/creates awareness on why racism is not acceptable. The best two films will be awarded $300. There are two categories, Ages 15-22 and Ages 22 and up. Winners of the Anti-Racism Short Film Contest will be featured on the Asian Heritage Month of May Film Festival and their social media platforms.

Although the original deadline was April 1,  the window for submissions will be extended till April 20.

Education and awareness is the first step to stop racism, says Jié. Through continued conversations and a call to action for Canadian politicians to denounce racism and hold those who commit hate crimes accountable, we can grow together as a community towards a brighter future.

Canada’s winters can be unpredictable. Here in Manitoba, one day, we can have lovely warm sun. The next, it can be blistering cold. Even those who have lived here their whole lives can get caught off-guard. One joke often used is that everyone forgets how to drive on the year’s END_OF_DOCUMENT_TOKEN_TO_BE_REPLACED

There’s been a bit of a road bump for one of Winnipeg’s North-End Community organizations as they look for a new facility. Luckily, there are opportunities to rent while they search, a testament to the unity found within the community. Founded in 1999 by a group of women who came END_OF_DOCUMENT_TOKEN_TO_BE_REPLACED

The end of the year is a busy time. From October to January, there are many observed festivities. Diwali, Dio De Los Muertos, Hanukkah, Christmas, Ōmisoka, and Kwanzaa. Established in the 1960s, Kwanzaa found its way to Canada in the 1990s. Thanks to the Canadian Kwanzaa Association, 2019 was the END_OF_DOCUMENT_TOKEN_TO_BE_REPLACED

Volunteering has many beneficial purposes, helping develop your skills, enhance your resume, build connections and help support your community.  There are plenty of opportunities for students through school, youth groups, student initiatives, or community ventures. When you’re retired, your history in the community and having more availability can make it END_OF_DOCUMENT_TOKEN_TO_BE_REPLACED

Islam is a faith followed by approximately a quarter of the world’s population and comprises many diverse cultures and ethnicities. The Islamic community also has a deep connection to Manitoba, with the Mosque run by the Manitoba Islamic Association (MIA), the oldest and largest in Manitoba. Since moving to Canada END_OF_DOCUMENT_TOKEN_TO_BE_REPLACED

In ancient Greece, it was believed the Muses, Greek deities of song, dance, and memory, would give creativity, wisdom and insight to artists and thinkers.   In the modern-day, the generations of great thinkers and creators may never come to be if they are not provided with the proper resources, teaching, END_OF_DOCUMENT_TOKEN_TO_BE_REPLACED